The Eve of War 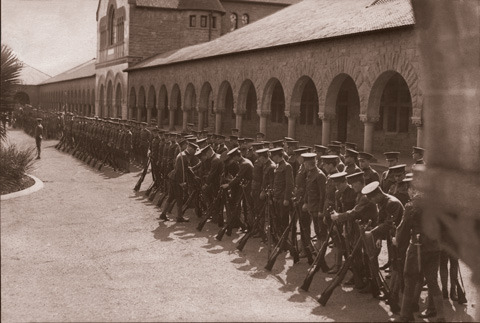 The National Defense Act in 1916 established the Reserve Officers’ Training Corps on college campuses around the country.  Soon after the United States entered World War I in April 1917, Stanford’s ROTC cadets gathered in the Inner Quad. The university’s enrollment plummeted 28 percent in 1917-18 when hundreds of male students, including most of those in the senior class, enlisted. The first Stanford-related WWI veterans to die in action were honored on campus plaques.

First to Serve, First to Die

Stanford's losses began at the Battle of the Somme.

The Mission That Drives Us

Staying true to what we're about, and thinking long-term.