We may think of Mars as the new frontier, but there is a vast territory closer to home that’s even less charted: the 70 percent of Earth covered by oceans.

Change is coming, however.

Ved Chirayath, a Stanford PhD candidate in aeronautics and astronautics who is also a research scientist at NASA Ames, has devised a way to explore in unprecedented detail our planet’s aquatic ecosystems, such as coral reefs. His work may help unlock other planets’ mysteries as well.

This new technology makes it possible to take multiple images of underwater objects from above the surface—with a video camera mounted on a drone, in Chirayath’s experiments (below)—then computationally remove distortions caused by wave motion to produce high-resolution, centimeter-scale, 3-D panoramas. The technique is called fluid lensing: Instead of being a visual obstacle, water becomes in effect the lens through which images can be captured. It should now be feasible to cost-effectively map whole regions—and, as equipment and machine learning improve, to chronicle those ecosystems’ life cycles and gauge the impact of climate change and other stressors, for example.

The implications for science are huge, as Chirayath explains in the captions that follow. He has collaborated on projects with Stanford marine sciences professor Steve Palumbi and won plaudits from Sylvia Earle, a National Geographic Society explorer-in-residence. But in addition to producing massive data sets, his experimental technologies will plumb the beauty of Earth’s own frontier. 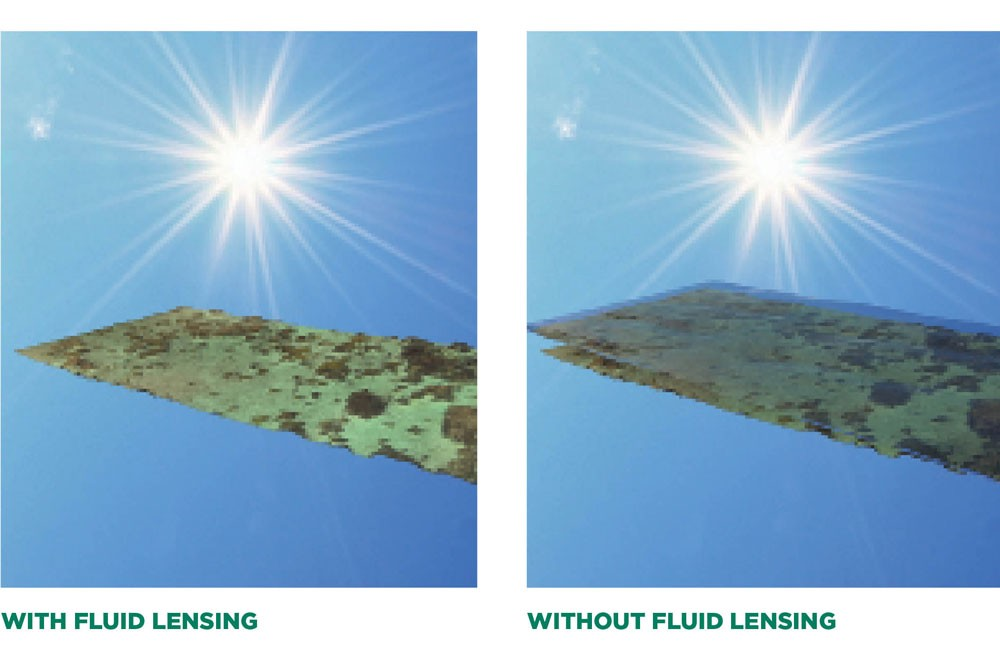 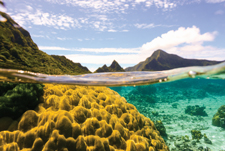 This unique 36-megapixel image (top) was captured at the air-water boundary at just the right moment, when a wave passed between me and a Porites mounding coral in the foreground, with Ofu Island in the distance. It shows a fundamental difficulty with studying aquatic systems: Ocean surface waves severely distort light as it passes through the air-water boundary. This refractive phenomenon essentially blurs what we can observe underwater from aircraft and, ultimately, our capability to understand and observe these ecosystems. Fluid lensing was developed specifically to combat this phenomenon and image aquatic ecosystems at the centimeter scale from the air. (See photos, above.)

Underwater Among the Corals 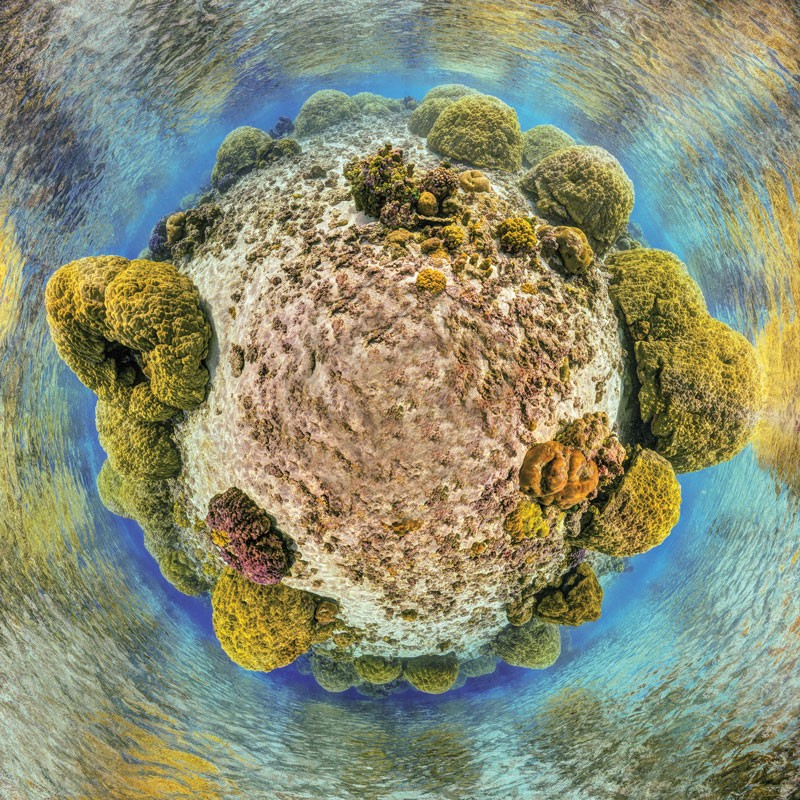 In this underwater 360-degree panorama, several car-sized mounding corals and branching corals dot the aquatic horizon in all directions. Because fluid lensing captures images of underwater objects from the air, it is vital to validate the data with in situ underwater measurements such as these.

The importance of these living fossils to human survival cannot be overstated. With the evolution of oxygen-producing microbes—cyanobacteria—3.5 billion years ago, microbial reefs in Earth’s shallow aquatic ecosystems arguably terraformed our planet into the life-support system for humans it is today, funda­mentally changing its atmospheric and geochemical composition. Known as stromatolites, such reefs dominate 80 percent of Earth’s fossil record and still thrive in striking abundance here. As one of Earth’s most ancient, prosperous and enduring living systems, they also inform astrobiologists’ search for life on Mars. Prior to our field campaign, no large-scale survey of modern stromatolites existed at the centimeter scale, severely limiting our understanding of their morphogenesis at the relevant growth scale.

This image and the one below were produced by stitching together more than 1,000 multispectral 36-megapixel images over multiple exposure brackets and angles to form a 360-degree gigapixel panorama with high dynamic range, similar to what the human eye would perceive. The image data were used to validate 3-D airborne fluid lensing survey data with calibration targets and photogrammetry.

The Porites coral in the foreground is estimated to be about 500 years old. Compared with stromatolites, modern reef ecosystems such as corals include an even larger diversity of life, including algae, fish, turtles, sharks and invertebrates. As did prehistoric microbial reefs, modern corals have a global distribution, and they play a crucial role in regulating our planet’s biosphere and supporting the activities of modern civilization. However, they now face one of the most significant challenges in their history, brought on by unprecedented anthropogenic pressures, climate change, ocean acidification, sea level rise, habitat destruction, agricultural runoff and overfishing, among other stressors. Complicating our understanding of these influences is a severe lack of data that effectively measures tiny growth rates—typically 1 centimeter per year—over regional areas. Such data are vital for the reefs’ adequate management.

Looking back on a presidency, with much to be grateful for.