First to Serve, First to Die

Stanford's losses began at the Battle of the Somme.

There is a corner of Memorial Court that is forever France. On either side of the court’s northeastern entrance, two small bronze plaques bear quiet testimony to the first two World War I casualties from the Stanford community, both killed 100 years ago this summer in that country’s northern fields.

There’s no reason to think the men, James Fergusson and Robert Pellissier, knew each other. Fergusson, Class of 1908, was headed to medical school by the time the young French literature professor arrived on campus from Harvard in 1911. But the two trod remarkably similar paths to their sad perches on the Stanford landscape.

Each left Europe at 14, achieving a success in the United States that they freely gave up at the outbreak of war—Fergusson returning to Britain, Pellissier to France. “[S]taying in California this year would mean such moral misery that immediate traveling was imperative,” Pellissier wrote to a colleague, apologizing for his hasty departure.

And both men joined storied infantry units, surviving shrapnel wounds in earlier fighting only to perish at one of history’s great disasters—the Battle of the Somme, where more than 1 million soldiers on all sides were killed or wounded.

As news of the deaths filtered to campus in the fall of 1916, America remained neutral but was moving closer to a war footing. In October, more than 200 students showed up for the first bugle call of Stanford’s newly established ROTC unit. Two years later, the university was effectively a military academy.

But the deaths of the first Stanford soldiers, particularly that of Pellissier, a recent and beloved presence on campus, inspired another kind of response: a rally to fund an ambulance at the front. “A glowing opportunity is now given Stanford,” the Daily wrote, “to take part in humanity’s aid and immortalize her soldier professor.” 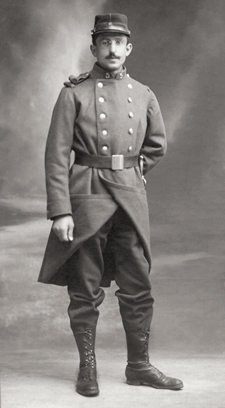 In October 1916, professors and students began the Pellissier Memorial Fund, intent on raising $1,600, the estimated cost of purchasing and operating a Ford Model T ambulance in France for a year. By January, they had amassed more than $1,900. The effort dovetailed with students eager for Stanford to be the first West Coast college to join the American Field Service, an ambulance corps that up to that point was largely manned by the Ivy League.

At first, the volunteers found more peace than excitement, but as the Pellissier ambulance and the unit’s 23 other vehicles dodged artillery shelling, the horrors of the Great War were soon apparent, from rampant rats to the eviscerations of “liquid fire.” As William Losh, Class of 1917, related, “The gas victims can scarcely move; They cough and gasp and choke in great pain.”

“It seems as though every time I go on duty new experiences increase my hatred of the hell of war,” wrote Franklin Skeele, Class of 1920.

Still, plenty of Stanford students were willing to follow. And in April 1917, when the United States had just declared war on Germany, thousands crammed San Francisco’s Civic Auditorium to cheer the next wave of ambulance drivers, 21 from Stanford and 42 from the University of California. “In the present war we must expend our youth,” Stanford’s new president Raymond Wilbur exhorted in his keynote, “but we must expend it in the best way.”

At the ceremony, the students received the first American flags designated by the U.S. War Department for the front, an honor that set off one of the stranger episodes in the Stanford-Cal rivalry.

Anxious to claim history for Stanford, junior Arthur Clifford Kimber raced to the East Coast ahead of the other Stanford volunteers. But in New York, he was jumped by a group of Cal students as he waited to join a parade down Fifth Avenue. Eager for the glory, the Cal students snatched the flag, jumped in a taxi and fled.

Kimber, though, was relentless. He jumped on the running board of another car, holding on as the driver went full throttle after the taxi, stopping to pick up a policeman in the process. “I guess the cop thought a murder had been committed,” Kimber wrote.

The flag was recovered near Central Park. And on June 4 in Tréveray, Kimber presented the first officially sanctioned American flag to be unfurled in the war at an elaborate ceremony witnessed by a regimental band, two regiments of French troops and the first wave of Stanford volunteers.

In 1918, the flag was returned to campus, where it was displayed in Memorial Church until the late 1960s, though its distinction waned not long after its arrival. A 1930 letter to the Daily complained that the flag, one of several stacked against a wall, was “moldering in dusty oblivion.”

In all, five waves of ambulanciers came from Stanford. They served all over the continent and helped distribute food after the armistice. Despite idle, even frivolous stretches, the work could also be relentless—one unit evacuated more than 1,000 soldiers in 24 hours, according to an account in the Quad. And it was dangerous; shells and mines destroyed ambulances, and some volunteers, such as Donald F. Clark, ’17, were badly injured by shrapnel.

The Stanford volunteers who paid the ultimate price were those who completed their service and then sought more active roles in combat. Kimber, for one, would not make it back with his flag. After serving as an ambulance volunteer, he joined the U.S. Air Service and died when his plane exploded on patrol in September 1918.

His name, along with those of Pellissier and 75 others from Stanford who died in service, is on a plaque in Memorial Auditorium. “That war insistently devours such men as Clifford Kimber is its final indictment at the bar of civilization,” wrote David Starr Jordan, then Stanford’s chancellor emeritus.

When it comes to lung health, sighs matter.