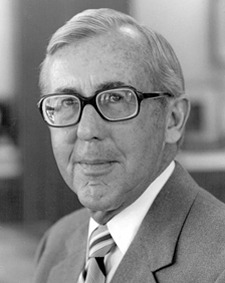 Before he was called visionary, John R. "Jack" Beckett endured harsher words. It was 1970, and the pyramid-shaped building that Beckett had championed for his company, Transamerica, was rising over San Francisco, attracting criticism. "San Francisco's folly," Chronicle columnist Herb Caen called it.

Beckett, president of the insurance giant since 1960, waged a public relations campaign for the building's then-radical design (by architect William Pereira) and oversaw every aspect of its construction. He liked the shape because it allowed light to filter to the street, according to a Transamerica corporate history.

His daughter Belinda, '74, was at Stanford while the pyramid was being built. "I certainly never told anyone my father was the one who was making the controversial building." Negative publicity annoyed and frustrated him, she says, but he was determined to create something of distinction for his company and the city. "He thought of it as a big piece of sculpture."

"I believe his confidence came from a basic belief in the goodness of people," says his daughter Brenda, '71. "When he said, as he often did, 'What a beautiful world!' he absolutely meant it. He was optimism personified."

In addition to growing Transamerica into a provider of financial, travel and leisure services until his retirement in 1983, Beckett served on the boards of a host of companies and the U.S. State Department's Blue Ribbon Advisory Committee on International Business Problems under Presidents Johnson and Nixon.

Beckett enjoyed playing tennis, growing orchids, collecting art and reading. He belonged to the Pacific Union Club, the Bohemian Club and the Menlo Circus Club. Evenings, he played standards on the piano and composed love songs for his wife of 41 years, Marjorie.

He was predeceased by his first wife, Dian Calkin, '50. Survivors include his wife and daughters; stepsons Ted and Donald Abenheim; and two granddaughters.

What Do Students Need to Learn?