CONSIDER THE COSY: Why reheat when you can keep your water warm longer? holsr/Flickr 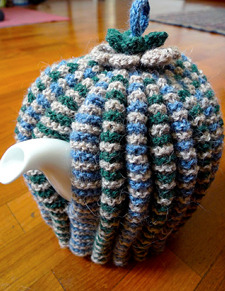 CONSIDER THE COSY: Why reheat when you can keep your water warm longer? holsr/Flickr

Q: What is the best way to boil water in a modern home? Is it better to use the microwave, an electric kettle, a gas stove or an electric stove? Also, Is there any truth to the notion that once water has been boiled it shouldn't be boiled again—thereby wasting it?

Arriving home on a cold, rainy day to my poorly insulated San Francisco Victorian house, I usually relax with a hot cup of tea and a magazine under a thick, wool blanket. I leave the furnace off, and if a little extra light is needed in the winter gloom, I make do with a flickering candle.

Now, let's consider an alternate scenario. Picture, if you will, a man in his underwear dancing throughout his equally poorly insulated house, blasting the heat, blaring the stereo and cooling himself in the kitchen by leaving his freezer door wide open.

Alarmingly, Erin, we tea-sippers may actually be doing more damage to the environment than our madly dancing counterpart.

Improbable, you say? Well, yes. But not impossible. As with so many issues of energy usage, it all comes down to where, exactly, the energy we use comes from. If our modest mugs of hot water are boiled with electricity generated in a coal-fired power plant, while our profligate counterpart powers his late-afternoon party with electrons captured from roof-mounted solar panels, he may ultimately be generating less greenhouse gas and other pollution despite his vastly greater energy use.

All of which is a very long way of saying that if you get your electricity from a renewable source, then the electric kettle is your most efficient choice. However, if—like most of us—your electricity comes from a mix of coal and natural gas-powered plants, then using a kettle over a gas stove is more efficient.

Jonas Ketterle, '08, MS '10, a mechanical engineering graduate who recently won a $75,000 grant from the EPA to help design greener dorms, explains that it all comes down to energy loss during the generation, transmission and final use of electricity. "Say the power plant is burning gas to make electricity," he says. "Then only 30 to 40 percent of the energy content of that gas arrives at your house." You're better off burning the gas directly to heat the water.

If electricity is your only choice, an electric kettle is more efficient than the stove, because the heating element is in direct contact with the water. And microwaves are the least efficient method of all.

As for re-boiling, we'll take a closer look in the Nitty Gritty, but if you're using clean municipal water, you probably don't have to worry. If you're planning to make tea out of dehumidifier drippings, however, you definitely want to read this SAGE answer first.

David Carini earned his master's in communication in 2010.

Jim Plunkett has taken a lot of hits over the years. Thanks to family and a group of teammates who remain best friends, Stanford’s only Heisman Trophy winner still stands tall.