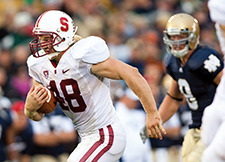 That's what Sports Illustrated went with in its headline on Owen Marecic: "The Perfect Player." If that sounds over-the-top—it is based on quotes from Stanford coach Jim Harbaugh, perhaps college football's preeminent hyperbolist—it's nevertheless credible. Marecic, a senior, oozes so many positive attributes that it's not surprising he stands out so singularly. He's apparently the only player in major college football who's a two-way starter, playing fullback on offense and linebacker on defense. This amounts to competitive magnificence or derangement, depending on your perspective.

The popular assessment in football circles, as well as the national buzz: magnificence. After this season's first four games, all blowout wins for the Cardinal, Marecic had performed superbly, with no sign that he had pain boundaries of any sort, even though his positions are two of the sport's grittiest. In the fourth game, against Notre Dame, he added a spectacular achievement to his standard remarkableness. With 7:58 left in the game, Marecic scored a brutishly fullback-style touchdown on a 1-yard plunge. Following the kickoff, he intercepted a pass at linebacker and sprinted 20 yards for another TD, 13 seconds after the first. Scoring on offense and defense in the same game is rare—Marecic is the first to do it since 2006—and the 13-second turnaround had the dynamism of a video game.

The big question remains the same one Marecic has been hearing since his iron-man role became clear: What does the incessant battering and bruising feel like?

"It feels great," Marecic said, just before the trip to Notre Dame, explaining that what he's mostly savoring is gratitude. "I'm very fortunate to have the opportunity to be on the field. There are a bunch of guys who don't have the chance to be out there."

There's no "golly, shucks" quality to Marecic, a human biology major. By all accounts, his modesty is intrinsic, and he's sold on the concept of team-as-family. The bond is fused, he says, by a contagious energy that starts with Harbaugh and demands an intense group commitment in practice. If there are moments when he feels the wear and tear, Marecic notes, "it's because you've pushed yourself further than the comfort zone and given yourself over to the team."

Harbaugh revels in talking about how Marecic doesn't talk about himself. "Owen makes it sound like he's just out there while everybody else around him is just making his job easier."

Both his jobs, that is. The physical toll aside, Marecic, 6-foot-1, 244 pounds, has to absorb twice the game plan that his teammates do for each opponent. The responsibility of studying game assignments, along with varying demands on his technique at each position, elicits the one acknowledgement Marecic will make about the extreme nature of his situation: "I feel like I have two jobs to win every week in practice."

A blocking stalwart at fullback his first three seasons, Marecic's spot-duty work on defense in 2009 led to this season's throwback casting. If his long blond hair doesn't invoke the one-platoon players of the early 20th century, he more than compensates with a classic fortitude. He's either going to crack opponents' helmets or his own, and he has.

Stanford lists Marecic as "perhaps" the only two-way starter on a major-division team because it's a difficult fact to verify, changeable at any moment if another team chooses to start a player both ways. But it hardly seems like much of an asterisk, given that he's otherwise touted as perfect.

Jim Plunkett has taken a lot of hits over the years. Thanks to family and a group of teammates who remain best friends, Stanford’s only Heisman Trophy winner still stands tall.

New Light on the Brain

By combining genetics with fiber optics, Karl Deisseroth has given researchers a powerful tool with which to probe our most enigmatic organ.