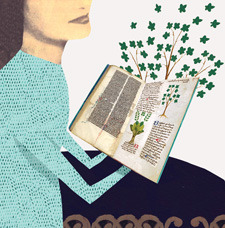 When I was admitted to the Stanford English department, I had never touched a medieval manuscript. I had seen them in museums, carefully protected, and I had studied images of them reproduced in scholarly books. But my work—the work that got me admitted to a PhD program as a medievalist—had been based entirely on modern editions of medieval texts. Actually touching, examining and learning from medieval manuscripts was, so far as I could tell, something other people did. All that changed during my first visit to Green Library.

As part of the department's Admit Weekend, we were taken to Special Collections, where librarian John Mustain had selected some books to appeal to our varied interests. First editions of Patricia Highsmith novels rested in cradles not far from late-medieval letters from the pope. I walked through the room with my fingers laced behind my back, feeling like a child in a shop filled with beautiful, breakable objects.

I think it is characteristic of Stanford Libraries that my reserve was immediately noticed. Mustain and English professor Jennifer Summit urged me to touch a manuscript and turn its leaves, which were not paper but parchment. I felt the subtly different textures of the sides of a single leaf—the rougher "hair side" and smoother "flesh side" characteristic of parchment. Continental bookmakers, Mustain told me, typically placed hair side against hair side and flesh side against flesh side. Texture could, in some manuscripts, be a valuable hint to a researcher that a page had gone missing.

Every year, courses are offered in partnership with the Stanford Libraries. During my second year here, a course gave students a sense of books as material artifacts: how they are made, how they are kept. Our final project was to create a modern edition of a never-before-published anti-Catholic pamphlet from 1594 about conspirators against Queen Elizabeth I.

One afternoon I combed through the pamphlet, carefully creating a list of every name it mentioned. Using an online database, I discovered that these men were, in fact, some of the most famous Catholic agitators and conspirators of the day. With that information we were able to tease out a different, more historically correct reading of the pamphlet. It was one of those perfect moments when new technology could be used to illuminate the overlooked secrets of a 400-year-old text.

Last spring the subject was paleography—essentially the study of very old handwriting. Writing styles, punctuation and contractions change a great deal over the course of 1,000 years, and a good foundation in paleography is essential to being a good medievalist. I'd investigated options at other campuses for gaining needed skills, but the costs were prohibitive.

It is difficult to describe my relief when I learned that paleographical training would be offered on my home campus, using our own holdings. A surprisingly diverse group of other graduate students, undergraduates and faculty were drawn to the course, and it renewed my interest in studying books for how they are built as well as what they contain.

One manuscript I worked on, a 13th-century text of Ovid's Metamorphoses, was done in a tiny, disciplined hand. Each page also bore even smaller, equally disciplined writing between the lines of poetry, explaining hard words, and still more writing in the margins, explaining the text. It goes like this for more than a hundred pages. But in the poem's final lines, the letters grow larger and sloppier, almost boisterous. The writing itself reveals the joy and exhaustion the scribe felt as he finished a long, difficult project.

Beyond the "Thank God I'm done!" conclusion of the first scribe, there was handwriting that recorded the book's purchase in 1477. A flyleaf bearing the odd squiggles, stair-steps and hearts of someone's pen trials. A notation that the manuscript was once owned by an important 19th-century collector. A gold address sticker from an owner in New Jersey. The plate that announces that the book was purchased in 1980 for the dedication of Green Library. I linger over these marks because together they tap into a centuries-long story—one we do not learn, or even imagine, when we only work with modern editions.

BRIDGET WHEARTY, a doctoral candidate in English, presented a longer version of this article as a speech to the Stanford University Libraries Advisory Council.

What Do Students Need to Learn?