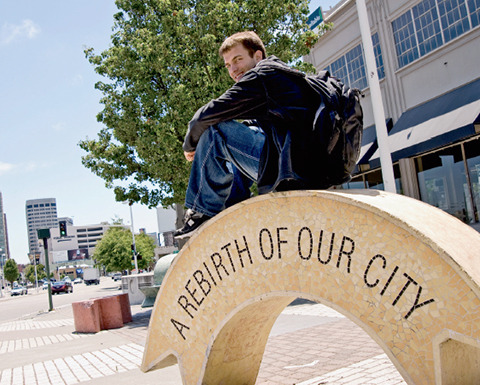 When he was a kid, Daniel Jacobson drew pictures of cities, maps of places that didn't exist outside his mind. They had boulevards and buildings; they were built on coastlines, at the mouths of rivers and in high mountains. As he grew up in the very real city of Richmond, Calif., Jacobson filled notebooks with his imaginary metropolises. It's rare for the enthusiasms of childhood to become our life's work—consider the oversupply of paleontologists and train engineers if that weren't so—but Jacobson is on his way to becoming someone who draws pictures of cities for a living.

If there is such a thing as an urban planning prodigy, then Jacobson just might be one. Last spring, as he was wrapping up his sophomore year at Stanford, the urban studies major finished a 140-page plan to restore life to a patch of downtown Oakland that's endured a decade-long downward slide. It's not merely the heft of the document or the scale of its ambition that's impressive (http://oaklandstreetcarplan.com). What's remarkable is that local bigwigs from the Chamber of Commerce president to City Council members are taking the plan seriously. Even Jacobson is surprised at how quickly his independent study project became part of Oakland's conversation about itself. "What's fascinating is that it's actually happening," Jacobson said this summer.

What's the plan? In painstaking and meticulous detail Jacobson makes the case for a 2.5-mile streetcar line running from Oakland's historic waterfront to a moribund district near downtown that is home to a handful of struggling car dealerships. The streetcar would be more than a people mover. According to Jacobson's forecasts, an economic boom would flower along its tracks, climaxing in the transformation of Oakland's old Auto Row into a swanky retail district with high-end stores in the showrooms where new Oldsmobiles and Mercurys once gleamed.

This, according to one of the people who guided Jacobson through the arcana of 21st-century streetcars, is the genius of Jacobson's report. "It is a real art to be able to articulate the combination of investment in public infrastructure and the outcome to be the rejuvenation of a community," says Rick Gustafson, executive director of Portland (Ore.) Streetcar, a nonprofit corporation chartered by the city to run the system.

Indeed, Gustafson was skeptical when an undergraduate called him out of the blue last year and told him he wanted to learn everything he could about Portland's streetcars. Nonetheless, Gustafson invited him to Portland. With a small grant from the vice provost for undergraduate education, Jacobson journeyed north to see firsthand a formerly struggling neighborhood saved by a streetcar. Portland's streetcar system, which debuted in 2001, is credited with helping to bring life and money back to several blocks of old, unused warehouses, now Portland's hip and hopping Pearl District. The initial cost of $57 million has more than paid for itself, says Gustafson, who, it should be noted, is also a principal in a consulting firm that would likely bid to help develop Oakland's streetcar plan if it moved forward.

The dollar signs are a big lure for city officials facing a $31 million budget deficit this year, and a $48 million deficit the next. Home to 400,000 people across the Bay from San Francisco, Oakland is a city of contradictions forever poised on the cusp of a renaissance that never seems to arrive in full. It boasts the hottest restaurant scene in the Bay Area right now, but its unemployment rate is 17 percent. In July, the Oakland City Council voted to lay off 80 cops. They may have to let go of another 122 in January. Those aren't the headlines citizens like to read, when their city is frequently ranked one of America's most violent. Politicians running for re-election don't relish them either.

So, it's no surprise that a plan predicting 24,000 new jobs, $6 million in new sales tax receipts and 20,000 new Oaklanders would catch the attention of Oakland's city leaders. "His study has added a degree of public attention to the big picture, why a streetcar matters," says Rebecca Kaplan, JD '98, Oakland's at-large City Council member, who is running for mayor this year.

But it's not just Jacobson's number crunching that foretells future success as an urban planner. Jacobson has an uncanny sense of how things actually get done in an American city. Underneath its architecture and ordinances, a city's true power base rests on an intricate web of alliances, friendships, egos, enmities, greed and pride. If a good idea that penciled out were all that was required to get things done in Oakland, California's eighth largest city would be a different place. So would most cities.

This summer, Jacobson had an internship at Berkeley-based urban planning firm Calthorpe and Associates, and while he's hobnobbing with Oakland's power brokers now, his initial introduction to the city came through its more troubled precincts. While in high school, Jacobson volunteered at Oakland's McCollum Youth Court, which provides young people like Jacobson an opportunity to get hands-on training in a legal setting while diverting young offenders from the criminal justice system. Jacobson's hometown of Richmond is a tough place by Bay Area standards, but he grew up in one of the city's nicer neighborhoods and attended a private high school. The youth court offered a window into a world where kids had few opportunities for a good education or meaningful job training.

The experience stayed with him, and when it came time to pick an independent study project, Jacobson knew he wanted to do something in Oakland—but with a Silicon Valley mindset. "Stanford has such a great culture of entrepreneurship and innovation: I'm surrounded by friends who are constantly pushing the envelope in nearly every field possible," he said.  "I really wanted to channel that 'Google mentality' toward confronting the economic and environmental challenges of Oakland."

Will a real streetcar rattle along Oakland's Broadway? There's a lot that can go wrong before the city sees a new streetcar line. But Kaplan, who helped bring a free shuttle to downtown this summer, says she hopes the bus will be a first step toward building a streetcar line. She's made streetcars part of her campaign platform. It's a long way from a kid's drawing in a notebook.

ALEX GRONKE is a longtime Oakland resident and publisher of the daily news website Oakbook.

New Light on the Brain

By combining genetics with fiber optics, Karl Deisseroth has given researchers a powerful tool with which to probe our most enigmatic organ.