Remembering when losing wasn't everything—even though it was the only thing. 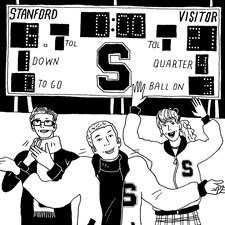 One thing Stanford football fans know all too well is that winning seasons don’t come easily. Last year’s 8-4 record was the first for Jim Harbaugh after two losing seasons and the first for the Cardinal since Tyrone Willingham’s last team went 9-3 in 2001. In between? Never mind.

But for all the disappointments Stanford fans have had over the years, none matched the season 50 years ago when the team played 10 games and lost them all.

I was sports editor of the Daily that fall, and so long as you stayed away from the stadium, it was an exciting time to be at Stanford. John F. Kennedy and Richard Nixon were racing for the White House—we were all fascinated by the latest campaign wrinkle, televised debates. Surrogates for both candidates visited campus. Most notable perhaps was Thomas E. Dewey who, while endorsing Nixon, declined to predict victory. Since 1948, Dewey explained, he had stayed out of the prediction business.

Football, alas, was less exhilarating than politics. The team coached by Cactus Jack Curtice blew a two-touchdown lead over its first opponent, Washington State, and then kept that pace. The season ended with a 21-10 Big Game loss to a Cal team that up to that point had won only one game itself.

The lowest point came in the fifth game against San Jose State, a team that was on the schedule for the sole reason of anticipating a Stanford victory. The Spartans ran off to a 34-20 win. Jubilant San Jose fans battled student police to tear down one set of goalposts, while the unguarded uprights at the other end of the field fell to impromptu marauders who attended local elementary and high schools.

The loss, Glenn Alford, ’63, wrote in the Daily, was “the lowest level to which Stanford football had ever fallen,” and while few could disagree, the student body shrugged it off. A small effigy representing Curtice hung on a wire outside the bookstore, but there were no organized protests, no rallies expressing bitterness or anger.

If anything, the opposite occurred. Two weeks later, the student cheering section banded together to root loudly throughout the game, which ended with a sideline speech of appreciation from Curtice. The coach was carried off the field on his players’ shoulders—after a 21-6 loss to USC.

A few days later, what might be counted as the only successful undertaking of the season occurred a continent away when one of the University’s first Stanford-in-Florence contingents smuggled a large banner reading BEAT CAL into the Leaning Tower of Pisa and draped it over the side.

Curtice, quite astonishingly, lasted another two seasons as Stanford’s head coach—those teams posting relatively respectable records of 4-6 and 5-5—while after graduation I began a career that led me to writing a sports column for the Chicago Sun-Times. Covering Stanford’s 1960 football season, I often thought, was excellent preparation for writing about the Cubs.

Ron Rapoport, ’62, lives in Van Nuys, Calif. His latest book, written with Tim Reid and Tom Dreesen, is Tim and Tom: An American Comedy in Black and White.

What's the future of publishing if screens trump pages, and 'click here to buy' supplants bookstores?