A School for Southern Sudan 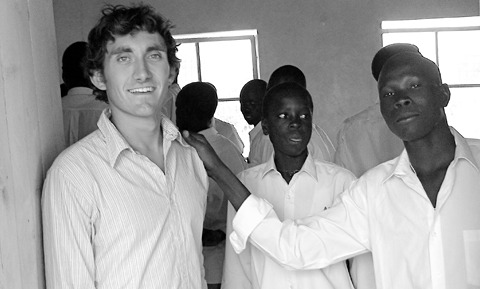 In a Sudanese village that just a few years ago had only barely passable roads leading to it, the Marial Bai Secondary School science lab is stocked with chemical solutions, Bunsen burners, anatomy models and more. "The school is a work in progress, but all the basics are there. Most everything you would see at a modern American high school, we have at our school in the middle of rural Southern Sudan," says Greg Larson, '05, associate director of the Valentino Achak Deng Foundation.

The nonprofit organization's namesake, Deng fled the village of Marial Bai on foot as a boy after attacks by militias from Northern Sudan. His story was told by author Dave Eggers in a fictionalized memoir, What Is the What. Now, after a 2005 peace agreement between Northern and Southern Sudan, Deng and Eggers are using the foundation to help Southern Sudan rebuild—starting with the school.

Larson, who majored in English at Stanford, learned about the foundation while working for McSweeney's, a publishing company founded by Eggers. "I had never been to Africa before," Larson says. "I basically fell into this sort of life-changing opportunity."

He spent the summer of 2008 and about half of 2009 in Southern Sudan overseeing the school's development with Deng. The region's only high school, it opened in May 2009 with 85 students. Today it has more than 250. The 18-building educational complex includes a girls' dormitory (a boys' dorm is in the works) and a compound for teachers.

Larson made another one-month trip in July with a group of volunteer teachers, two of whom spent the summer training Sudanese teachers to use the new lab equipment. "What felt like a fairly small project last year now feels like it's really turning into something," Larson says. Students are so determined to succeed that 40 of them will gather around one generator-powered light bulb to do their homework.

Operating in Southern Sudan is challenging. Once during the construction of the school, the team needed to move more than 100,000 bricks across a river. When the season's first rainstorm washed out the road, "we used a combination of boats and horse carts to get the bricks to the school site," Larson says.

The experience has given Larson a close-up view of "a really interesting and crucial time for Southern Sudan," which is set to vote on independence in January. "We're trying in this small way to help develop an educated generation of Southern Sudanese who can lead their country and help the rebuilding process."

Larson is not the foundation's only Stanford connection. Colin Casey and Max Magnuson, both '12, undertook a bike trip last summer across the United States to raise money for the foundation. David Levine, '90, a middle school teacher in Oregon, was among the volunteers who traveled to Sudan in 2009 to help with teacher training. Larson says he and Levine found it "kind of hilarious to be out in Sudan reminiscing about the Farm."

MARGARET STEEN is a writer in the Bay Area.

From Sudan to Stanford

From Sudan to Stanford

Don't Drink the Water (From Your Dehumidifier): Essential Answer