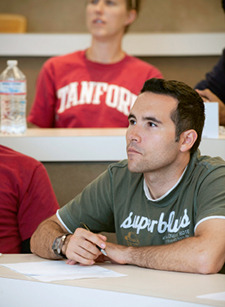 A national debate over the behavior of ousted Hewlett-Packard chief executive Mark Hurd had just made headlines. Advance publicity for Wall Street: Money Never Sleeps, a movie about greed writ large, was picking up volume. And political pundits were arguing daily over what it meant for candidates to be perceived as either pro- or antibusiness as midterm elections approached.

That was the backdrop when Stanford visited a preterm seminar—a compressed course given before the academic year starts—to stir a discussion about ethics and corporate character with students in the Graduate School of Business. With the hospitality of associate professor of political economy Steven Callander, we visited the Leadership and Crisis Management course to ask about perceptions and portrayals of Wall Street and U.S. business as ethically feeble.

In part, the visit was a spin-off from our 2009 question-and-answer session with GSB dean Garth Saloner, who discussed the need for principled thinking as part of analytical decision-making ("No More Business as Usual," Farm Report, September/October). Addressing the ripple effect of the country's economic crisis, Saloner said he believed "both management and management education are going to be tremendously affected."

Now, we wondered, in the middle of an uncertain economic recovery, how much were moral hazards still on students' minds?

Not surprisingly, we got a range of distinctive answers, first in class and then more deeply in follow-up phone conversations. If there was any common theme expressed by the four second-year GSB students we spoke to most extensively, it was that the failings of big business frequently had been sensationalized by the media and politicians. "Huge mistakes were made," acknowledged Natalie Diekmann. But her greater emphasis was that "saying the whole business world is unethical doesn't make any sense to me."

Framing the question in sweeping terms —"What do you think of the representation of Wall Street as an ethical wasteland?"—bothered them, although they acknowledged that the news environment sometimes feeds that notion. "There's reason to be concerned, but I don't think it's fair to say that it's rampant," said Dupree Scovell. "There's a mischaracterization that's from a political agenda and is pronounced over and over: that it's Wall Street vs. Main Street. And that's bogus."

On the same weekend we talked at length with Scovell, the issue percolated disparately in the New York Times and the Wall Street Journal. "Wall Street is a mess, a morass," began the Times review of Money Never Sleeps, while Journal columnist Kimberley Strassel opined on the ineffectiveness of "Twenty months of Democratic business-bashing." Engaged by the challenge of reexamining his convictions, Scovell had been asking himself what evidence he had for defending the business world as broadly ethical.

His working experience before arriving at Stanford provided his answer. He had spent about five years at a large firm whose activities included merchant development —constructing commercial buildings and then selling them relatively quickly, after reaching a certain percentage of leased space. Merchant developers, noted Scovell, are less concerned with long-term or community business relationships than ongoing building owners are; that can lead, he said, to some dubious leasing practices, such as under-the-table commissions. But he never encountered that at his company. "We were still creating value, and we were never willing to sacrifice integrity."

Kris Sandor, a graduate of the United States Naval Academy and a former submarine officer, approached the topic largely as a problem of a lax and permissive business culture, in contrast to individually instigated mischief. "I don't think there's a pervasive ethical bankruptcy," he said. "The system allows for people to act very capitalistically and opportunistically—and unchecked. Then their activities snowball. That just leads to people who are making money at somebody else's expense or invoking too much risk. But if you pull somebody particular aside, they're not going to strike you as the evil empire."

That system, under intense scrutiny for everything from subprime mortgage lending to the arcane formulas for financial derivatives, is in transformation, partly because of still-developing legislative reforms. Sandor, whose most recent work experience before attending Stanford included policy analysis for the Defense Department, doesn't believe that new laws can or will provide a total fix. Nor does he think that all the people in executive suites have absorbed enough of a cautionary lesson to eliminate the threat of misconduct. Yet he's convinced that progress has been made in deterring excessively risky investment practices, and he's hopeful that shareholders will take more responsibility in monitoring corporate strategies.

Sandor's most optimistic view, echoing a number of classmates, is that future executives, such as those who come from GSB classes, will operate more conscientiously by second nature. "I would hope our generation is sensitized to things like highly leveraged or sketchy derivatives," he said. "We should know better as we get into those positions."

Diekmann, a physicist who moved into business research for a U.S. management consulting firm in the Netherlands, said her work before Stanford led her into analyzing the increasing contribution of the private sector to public needs and causes, notably in the area of carbon reductions and other environmental concerns. She acknowledged that businesses can be pressured into socially constructive activity, but she's also confident that there's genuine altruism at work. "I totally believe that," she said.

Billy Boidock arrived at Stanford after working for three years in the consumer beverage products industry. He was quick to focus on the positive motivation that business students and up-and-coming employees should draw from corporate scandals and the national hubbub about them. "Regardless of the image of Wall Street," he said, "the examples of bad leadership should do one thing: inspire us to lead a different way."

Students had spoken succinctly during the conversation in class, with a few of them repeating two basic notions: that it's a wild exaggeration to cast business people as generally villainous, and that a corrective tide is coming in the startups and management initiatives their generation will lead. A week later, Boidock was almost fiery.

"Seeing some of the business environment now, with the BP situation in the Gulf, or going back to examples like Enron, it reminds me that with great power comes great responsibility. It may not always be that way, but I think it should be. In fact, just say it that straightforwardly: That's the way it should be."

A School for Southern Sudan