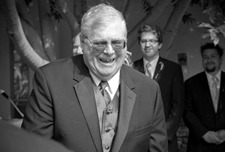 Peter J. Farley pursued many lives—submarine officer, surgeon, community philanthropist, marlin fisherman—but the co-founder of Cetus Corp. most enjoyed being a rule-breaking and risk-taking entrepreneur. After 1971, when he became the first physician to earn a Stanford MBA, he developed and invested in businesses at every turn. Farley died of a heart attack on June 7 at his home in Redwood City. He was 70.

Born in upstate New York on April 15, 1940, Farley attended medical school at St. Louis University and joined the Navy in 1965 as a doctor on a nuclear submarine. After discharge, he surprised his parents by enrolling in business school.

His friend Max James says Farley was known as the Phantom Classmate. "He told [Arjay Miller, the Ford president turned GSB dean] that he thought he should let him know in advance that he did not intend to attend many of the classes." Farley preferred instead to "poke around in the high tech labs around Silicon Valley to see what applications might be considered for the medical industry." The dean and his bold student struck a deal: If the latter passed his exams and wrote up all his findings, the absences would be excused. Farley wrote more than 50 case studies and passed his exams with flying colors.

His experiences in the labs and garages of Silicon Valley convinced him that there were dazzling connections to be made between technology and medicine. Cetus, one of the world's first biotechnology companies, was instrumental in the development of the polymerase chain reaction, a DNA-copying technique, for which former employee Kary Mullis won a Nobel Prize.

Farley pursued passions from e-commerce to electronics, fish bait to boats. "Every single thing he encountered he was figuring out how to make it a business and, not just any business, but a global business," says his daughter Maureen McMahon. "He had this irrepressible optimism for the way capitalism worked." At his summer home in Georgia, Farley welcomed friends, local residents, scientists, entrepreneurs and anyone else he thought he could connect. "When he had it, he shared it with everybody," says neighbor Sheila Winders. He was an enthusiastic member of the Young Presidents Association.