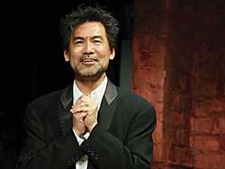 His is a famous name for students in Drama 169: Contemporary Dramatic Voices of Color. They study his work, and they’ve heard the story of how he wrote his first play, FOB (Fresh Off the Boat), in his Stanford dorm.

In February, there he sat, in their classroom—Tony Award-winning playwright David Henry Hwang, ’79. “It was a pretty rare opportunity for students to read the work and see the work, and then get to talk to the playwright about the genesis of the work,” says drama department chair Harry Elam, who teaches the course.

Hwang, who won the 1988 Tony award for M. Butterfly, co-wrote the book for Disney’s Aida and adapted Rodgers and Hammerstein’s Flower Drum Song for a 2002 revival of the musical. He was on campus for an intensive week of public talks, staged readings, open rehearsals and a few quiet moments, as he workshopped his latest play, Yellow Face. The drama about racial identity and theatrical casting premieres at the Mark Taper Forum in Los Angeles in May.

Hwang’s campus visit launched a partnership between the University and New York’s Public Theater intended to nurture playwrights and their new works through a residency program, commissions and student fellowships. A feature article about Hwang will appear in an upcoming issue of Stanford.