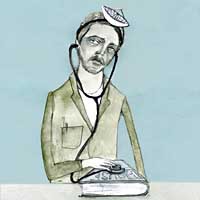 Here’s how it went on occasion, when I would take our son to his saxophone lesson. We would enter the downstairs studio office at his music teacher’s house. Our son would assemble his instrument and then take his seat, ready to begin. But instead of teaching, his instructor would be venting... about his recent encounters with the health care system.

I was happy to listen and offer a few thoughts and sympathy—while mindful of the clock ticking away the lesson time. I was a CNN correspondent covering health and medicine, so people like our saxophone teacher tell me stories.

These stories show me the many ways our health care system angers and frustrates people. No real surprise there. But what’s intriguing is that beyond complaining that health care is too expensive and their insurance plans are incomprehensible, most people have difficulty articulating exactly what they think is wrong and how they wish things were.

A few times I’ve started to jot down notes for a primer on health care, a book offering people a basic vocabulary and summarizing research trends. (A key message, to borrow from the Firesign Theatre comedy troupe, might be “Everything You Know Is Wrong.”) But curbing my enthusiasm was the knowledge that a lot of great books on health care and health policy exist—and it seems they haven’t managed to connect wonk world to the real world. People, even most Stanford alumni, don’t put “Read Up on Health Systems Organization and Financing” at the top of their to-do lists. What chance would such a book have in an America where the No. 1 leisure activity is watching TV?

Last fall, however, opportunity knocked. A publisher thought viewers of the Fox TV medical drama House might want to know how accurate the medicine portrayed on that show really is. And because 15 million to 20 million potential buyers, I mean viewers, tune into the show each week, well, we wouldn’t want to leave their questions unanswered, would we?

For those of you who don’t consume the recommended daily allowance of TV, House is about a brilliant physician who diagnoses weird cases that stump every other doctor. Dr. Gregory House (played by Hugh Laurie) also happens to be a jerk. The character is loosely patterned on the famously misanthropic detective Sherlock Holmes.

Of course, The Medical Science of House, M.D. could not be merely a gimmick. The book had to satisfy its cover promise to provide “The facts behind the addictive medical drama.” So I researched the bizarre cases on the show, the quirks of the lead character, and looked for entry points to relevant real-world health issues. If I’d written the book for the wonk world, it might have been titled Diagnosis and Treatment Decision-Making in U.S. Health Care: A Guide for Patients with Special Reference to Unusual Practice Patterns of a Fictional New Jersey Hospitalist.

In this season, one of the real-world issues has been physician impairment. Dr. House suffers intense chronic pain, the aftermath of muscle death in his thigh. Does his reliance on Vicodin enable him to stay in the game or does it impair his medical judgment? One authority I interviewed notes that House, so expert at “everybody else’s illness . . . is drastically inexpert about his own potential for addiction.” Another, describing society’s concern about addiction to pain medication, notes, “There is healthy fear and there is unnecessary fear. We see both things at the same time in medical culture today.”

To put the book in medical terms, I was handed a vector. Its cover, with graphics and marketing text tailored to House fans, would act like the viral protein coat of a gene therapy agent, but the payload would be explanations of evidence-based medicine, variations in care, systems approaches to the reduction in medical errors, principles of medical ethics, disease surveillance, and so on. With luck, it will reach readers who generally have been immune to the many previous attempts to draw attention to the serious health care issues we face.

ANDREW HOLTZ, ’78, has a master’s in public health from Portland State University. He writes about health issues on his website.

Cache Me If You Can

All around the Farm, hobbyists hunt for treasure using hand-held technology.

Preventing the Next Plague