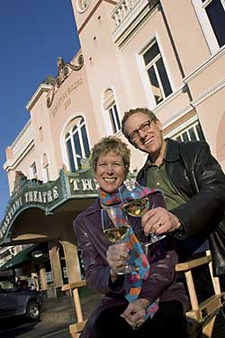 Brenda and Marc Lhormer brought business experience and a strong community spirit when they took over the Sonoma Valley Film Festival in 2001—and transformed it into Cinema Epicuria, an event that makes the most of its wine country surroundings. Wine and gourmet goodies are served to audiences at every screening during the four-day festival; local residents open their homes to accommodate actors, filmmakers and special guests.

Most of the action centers on the town square and its crown jewel, the 1930s-era Sebastiani Theatre, but the Lhormers have added venues for screenings, panel discussions and parties. They’ve enlisted corporate sponsors, Sonoma Valley wineries and other businesses. And they’ve started a film program at the local high school.

The festival’s small staff includes Chris Sawyer, probably the world’s only film festival sommelier. When pairing wines with movies, “the first thing I look for is themes,” he explains. For a profile of Johnny Cash, known as the Man in Black, Sawyer chose a zinfandel plus mixed blacks from vines planted in the 1880s. For Kinky Boots, about a transvestite who becomes a shoe designer, Sawyer thought the plot pushed the standard rules a bit, so he served an excellent rosé—not the most universally acclaimed of wines.

The festival emphasizes grassroots independent films and a few studio productions—little-known works that deserve a chance on the big screen. “We’re showing films that are very, very human,” Marc says. “They’re character-driven and in general uplifting.”

The couple has lived through their own share of drama. Brenda, ’83, had been working in marketing and communications; Marc, MBA ’86, in operations and entrepreneurship when they met in 1987, working at a Silicon Valley events company. By 1989 they were planning a yearlong trip around the world, but at a Fourth of July celebration, a shattered glass threw a sliver into Marc’s left eye—his good one. He was born with only light-sensing vision in his right eye; the accident left him legally blind.

“They told Brenda that I probably wouldn’t get my sight back,” Marc recalls. After 18 months and four surgeries, including a cornea transplant, Marc regained his sight. “It was amazing,” he says quietly.

Brenda took a job with Microsoft and they moved to Seattle. Marc managed start-up companies. They married in 1991, and for more than four years worked the proverbial long hours. When burnout hit, they quit their jobs and followed their dream of seeing the world. In Switzerland they discovered the Locarno International Film Festival. “It was very much a community-oriented, love-of-life festival,” Marc recalls.

Halfway through their 14-country trek, Marc’s parents joined them on an African safari. On the parents’ journey onward, their airplane crashed, killing his mother and leaving his father seriously injured. The couple cared for Marc’s father in Pittsburgh for five weeks, finished their planned year of travel, went home to Seattle and deepened their community involvement.

They loved their jobs but not Seattle’s weather. After the winter of 1998-99, marked by 90 days of rain, Brenda’s pneumonia and Marc’s bronchitis, they decided to move south. By autumn they were settling into their new hometown, Sonoma.

In April 2001 they volunteered with the Sonoma festival and by July, Brenda was its executive director. She and Marc, co-director, work for the festival full time, creating the sort of community-minded event they experienced in Switzerland.

“It’s the notion of having your life and your work woven into the fabric of your community,” Marc explains. “It’s something Brenda and I have in common—the idea of being very locally connected but with a global perspective. Everyone here is involved. It’s a beautiful thing. It’s a small town but then you open it up and bring the whole world in. That’s what’s exciting about a film festival.”

“It’s really nice to see someone like [2004 honoree] Blythe Danner mingling with a shorts filmmaker from Seattle who’s never been part of something like that,” Brenda comments. “There’s a lot of very natural and organic interaction between the filmmakers, no matter who they are.”

“I think they’ve taken a sleepy little film festival and turned it into one of the up-and-coming film festivals in the country,” says producer J. Todd Harris, ’81, MBA ’86.

This year is the festival’s 10th anniversary, showcasing about 35 feature films (www.sonomafilmfest.org). The April 11-15 lineup includes Ops, a comedy starring Matthew Modine; Snow Cake with Sigourney Weaver, ’72, and Alan Rickman; Black Irish, a family drama; and After the Wedding, a Danish film with Mads Mikkelsen (the arch-villain in Casino Royale). A special presentation will feature more than 25 short films by local middle school and high school students.There also will be a special tribute to Academy Award-winning director John Lasseter (Toy Story, A Bug’s Life, Cars) of Pixar and Disney animation studios.

PATRICIA LYNN HENLEY, MA ’95, is a writer in Sonoma, Calif.