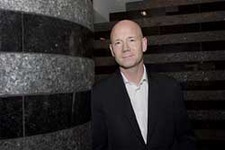 So why did he go back? “I found myself with a wife and a daughter,” he admits. “They generally frown on that sort of thing.”

His adventurous spirit has been tapped by the longest-running film festival in the Americas. With the San Francisco International Film Festival approaching its 50th birthday in April, Leggat was hired away from New York’s Film Society of Lincoln Center. His appointment in October 2005 followed a decade of management difficulties for the San Francisco Film Society, and by many accounts it has breathed new life into a flagging enterprise.

Since 1957, the festival has hosted more than 6,000 films, some so avant-garde they border on the bizarre. (In 1966, Incubus, the only known film made in the Esperanto language, starred William Shatner.) It shares close ties with Stanford’s documentary film program, which has one film screened there every year. This year’s festival, from April 26 to May 10, will host 200 films from 50 countries and present an award to George Lucas.

Kevin Spacey once quipped that “you can’t get [Marin resident Sean Penn] to show up for the Oscars, but he shows up for the San Francisco film festival.” Although its combination of star power and snob appeal has made it a landmark in celebrity-starved San Francisco, the past few years have seen a decline in attendance and acclaim.

Enter Leggat, the fourth San Francisco Film Society director in a decade. The long-ago winner of a $1,000 writing prize at Stanford (the money paid for a midwife when his second daughter was born in an Escondido Village bedroom), he earned his MFA in English and creative writing at Syracuse. Armed with 15 years of PR experience, he has grand plans to make the film society more than a once-a-year party.

Last March, the organization teamed up with film e-zine indieWire to launch SF360.org, a website to provide daily news and professional networking for the local film industry. It’s getting 400,000 hits per month. The film society also has begun to sponsor Howard Dean-esque house parties where socially conscious films are discussed.

“Film festivals really used to be the province of passionate amateurs,” Leggat notes. “Now they have to make the transition into a very commercialized industry. I feel lucky to be coming in at a time when SFIFF is hitting its stride in that regard.”

The 49th film festival, his first, saw an attendance of 82,000, up 5,000 in ticket sales from the previous year. He’s projecting 85,000 to 90,000 in attendance for the 50th, a number he says is that low only because construction work is taking place at Japantown’s Kabuki Theatre, the festival’s home base. In August, the film society became the third recipient of the three-year, $150,000 “secure foundation” grant from the Academy of Motion Pictures Arts and Sciences, which Leggat plans to use to strengthen cross-cultural exchange programs.

It’s a fitting goal for someone as cross-disciplinary as Leggat, whose science fiction novel, Song of a Dangerous Paradise (Cambrian Press), was published in January. “I feel like it’s taken me 20 years to figure out what I want to do with my life,” he says. “At least I’m finally getting somewhere.”