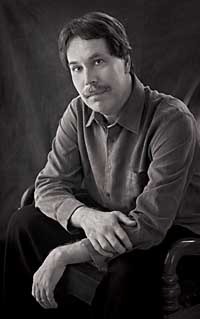 In his book Healing Songs, music historian Ted Gioia recounts a story about Charles Kellogg, a naturalist who knew 200 different bird calls and toured the country as the “Birdman” in the 1920s and 1930s, demonstrating the powers of sound with his voice and fiddle. One day Kellogg was walking with a friend in Manhattan when he stopped short because he heard a cricket chirping. “What cricket?” his friend asked. “How can you hear a cricket in the midst of all the noises here in the city?” Insistent, Kellogg led his companion to a crevice in a wall, and there was the cricket.

Then Kellogg took a dime from his pocket and dropped it on the sidewalk. Heads turned immediately.

“People hear what they want to hear,” says Gioia, ’79, MBA ’83, a pianist and composer who helped launch the Stanford jazz studies program. As Kellogg showed, it all depends what song you’re listening for.

In a sense, Gioia’s career illustrates the same principle. “As a jazz musician, I prided myself on things that were complex,” he says. Then he began discovering other forms of music “so heartfelt and simple—so simple you could hardly analyze them,” Gioia explains. “About 10 years ago, I started taking notes on the music of everyday life. I was fascinated by how people take music into their life and make it their own.”

He began collecting songs that show the role music plays in “timeless patterns of behavior”—for example, in melodies of worship and ritual, in storytelling songs, in tunes that help soldiers march in step. “These are songs that had a purpose: to enhance the way we live,” he says.

That project led to his two books published by Duke University Press in 2006, Healing Songs and Work Songs. A third, Love Songs, is in the offing.

“Everywhere we hear the mantra of ‘art for art’s sake,’ yet almost never do we hear about art for our sake,” Gioia observes in Work Songs. “My goal is to comprehend a history of music not as an account of great composers, of artistic movements, or of evolving styles, but rather by focusing on the points of impact, on those decisive moments in which artistic creation and consumption meet and in which the lives—of individuals, of communities, of tribes and nations—are transformed. For me, this is not a small matter, but rather the critical component in the whole equation, the key to understanding what music has been and can be.”

Gioia has been interested in music “pretty much as long as I can remember” and as evidence has a photo of himself as a toddler, sitting on a piano bench plunking a random note with his small hand. The piano belonged to his uncle Ted, who had lived with the family in Hawthorne, Calif., a gritty, multiethnic burg near the Los Angeles airport, when he wasn’t at sea with the Merchant Marine.

Gioia describes his uncle as “an extraordinary person” who taught himself several languages and reputedly knew the entire Inferno by heart in the original. “He was one of the most knowledgeable of his generation about Mozart and Haydn,” Gioia adds. His uncle corresponded with the musicologist Alfred Einstein and purchased an enormous number of musical scores with his small income. “Mozart composed over 600 works: you could open up to any page and show a few bars, and he could identify it.”

Shortly after purchasing a piano for the Gioia household, the uncle died in an airplane crash at age 27. “I was named after him, and always felt a special affinity for him, a sense of his spiritual presence in my life, even though I never knew him,” Gioia says. (He dedicated his first book, The Imperfect Art: Reflections on Jazz and Modern Culture (1988), to his namesake. Gioia’s older brother, Dana, ’73, MBA ’77, chairman of the National Endowment for the Arts, also has written about this uncle’s influence. For news of Dana Gioia, see Farm Report.)

After years of music lessons, Gioia’s “aha” moment happened at 16. “When I was developing as a musician, I tried a number of different forms of self-expression,” he recalls. “Classical had the sophistication I wanted—but it lacked the immediacy in emotional impact I craved, and it lacked spontaneity and the ability to improvise. Rock lacked sophistication and depth.” Then one night he went to a jazz club and heard a live band. “It changed everything for me. Within ten seconds, I knew this was what I wanted to do. I practiced relentlessly, soaked up music whenever I could.”

A few years later, as a Stanford junior, Gioia taught his first course on jazz, through a special undergraduate program sponsored by Art Barnes in the music department.

Saxophonist Jim Nadel, who worked with Gioia in starting the Stanford Jazz Workshop and Festival, says, “Ted Gioia has been able to make such a valuable contribution to music scholarship because, in addition to being a fine writer and musicologist, he is a wonderful musician.”

Saxophonist and jazz composer Mark Lewis performed and recorded with Gioia in the 1980s and ’90s. He describes Gioia’s music as “very sensitive, introspective, harmonically advanced, in a Bill Evans frame of mind. He has rhythmic diversity, which isn’t always heard by people looking for something mundane. It’s unique, and fresh. It sparkles. It’s clean. It’s cerebral, but has a lot of tender emotion to it as well. It’s refined, but it’s not sterile.”

Gioia took three degrees—he also holds a BA from Oxford University—but none in music. “It looks like studying English and philosophy was not good preparation, but for the way I wanted to write about music, it was very good preparation,” he says. His first pieces were written for the Stanford Daily, and his motivation was venal: on a tight student budget, he wanted to get records for free.

“I became a music writer, but I didn’t intend to become a music critic. Rather, I’m a cultural critic, using music as a stepping-off point. Not what music says about harmonic structures, but what music says about our times.” His landmark The History of Jazz (Oxford, 1997) is widely acclaimed; Jonathan Yardley of the Washington Post wrote that it lives up to its title as “the” not “a” history of jazz.

Both Healing Songs and Work Songs make interesting observations about our culture and values. For example, many people today consider work songs degrading, but Gioia calls them “statements of human dignity. All work is dignified. It adds dignity to day-to-day life,” he asserted last fall on National Public Radio’s All Things Considered. He notes that people will fight to keep music on the job to make the workload lighter, even if it’s via radio or earphones rather than their own throats.

Music can lend dignity even to prison. Gioia observes that “Po’ Lazarus,” recorded in a Mississippi prison in 1959, went on to win a Grammy award in 2002 after it was featured in the film O Brother, Where Art Thou? He recounts how James Carter, now an octogenarian, didn’t recall making the recording, but accepted the royalty check. (When told it was outselling Michael Jackson, “he said he’d slow down and give Michael Jackson a chance to catch up with him.”)

Gioia believes he has found a musical mother-lode. “The amazing thing to me is that nobody had written on these subjects. No one had gone to the trouble of trying to look at them seriously. It’s almost an open field for researchers.”

His work has taken him to Plano, Texas, where he currently lives. “My research over the last decade has increasingly focused on traditional music—work songs, cowboy songs, Native American music and more recently early blues. Texas has been an excellent place to pursue this research.” Norton will publish his Delta Blues this year; Gioia also is assembling a team of writers and reviewers to launch Jazz.com.

And the MBA still comes in handy. Years ago, Gioia worked for the Boston Consulting Group then helped manage a leveraged buyout and IPO at Sola International in Menlo Park. (He recalls being “the only executive on Sand Hill Road who had a piano in his office.”) In Plano, he works with a Texas-based company on strategy and acquisitions as he continues his research.

While others hear only the dime falling, Gioia wants to alert people to the singing cricket in the crevice. He has developed the knack of listening to both.

A Recommitment to the Humanities

Now, more than ever, we need scholarship that examines and evokes the human condition.