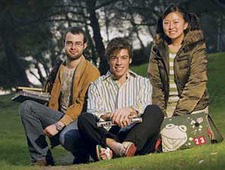 The first title they considered for the new literary magazine—Caesura—was taken by several off-campus publications. They thought about 94305. Maybe too gimmicky.

The winner? Leland Quarterly. After all, says editor Bob Borek, “the school is here because of Leland.”

With 800 copies of an inaugural 44-page black-and-white issue distributed, and volumes to go, Borek is happy with both the number of submissions (500 pages for the second issue) and their quality. “In Leland, we’re trying to pull people in from all over campus, people who wouldn’t necessarily subscribe to a literary magazine,” he says. “We’re trying to mix up the content.”

The first issue, Fall 2006, which includes a critique of so-called “strong-man politics,” along with more predictable fiction, poetry, photography and reviews, reflects the eclectic tastes of its editors. Borek, ’08, is an English major who reads Beckett; international relations major Nick Hoy, also a junior, is devoted to Jonathan Franzen; and senior English major Teresa Kim, ’07, loves the work of poet Anne Carson.

When editors Borek, Hoy and Annie Wyman, ’08, approached Jones lecturer Andrew Altschul last year for advice, he says he wished them well but knew from previous experience working with student publications that Leland, like now-defunct The Mind’s Eye and Word Choice, could easily “fall by the wayside.” But Altschul looks at the result a year later: “a smart, beautiful, professionally edited and laid out publication, determined to show the range of creativity, insight and determination among Stanford undergraduates.” The fiction and poetry, he adds, “are top notch, the criticism original and thought-provoking, the photography arrestingly good.”

The winnowing process often begins in the 680 Lomita dorm lounge and migrates to the Terrace Room of Margaret Jacks Hall, home of the English department and creative writing program. “In the first round, we get rid of maybe half [the submissions],” Hoy says. Of 80 incoming poems, the editors know they can only publish four; several dozen stories must be culled to one or two pieces of fiction. “Then you can start serious discussion of the rest, which can be a fun process.”

About 10 new faces, mostly sophomores, have signed up to work for Leland this year, and Borek says that augurs well for the magazine. “They’re diligent and committed to it, and we’re trying to set it up so it will last for a long time.”

The magazine is free on campus and online.

Getting your mind right is the key to achievement.