It's Official: Wie Headed to Stanford 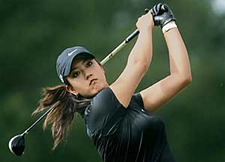 Michelle Wie was 12 years old in 2001 when she joined the LPGA tour. But she says that accom­plishment ranks behind the one she achieved in December: getting into Stanford.

“It’s really rewarding when you’ve worked your butt off for all of your high-school and middle-school career to try to get into a school, and you finally do,” says Wie, who visited campus for three days in February. “It’s probably the proudest I’ve ever felt.”

After four years touring as an amateur, Wie turned pro in October 2005. Last year, she earned an estimated $20 million from endorsements, appearances and golf winnings, including a third-place finish in the U.S. Women’s Open.

Wie’s aunt, Sang Hyoun Lee, MS ’76, and uncle, Bong Wie, MS ’78, PhD ’81, both attended Stan­ford, and her grandfather, Sang Kyu Wie, was a visiting professor. She is occasionally com­pared to Tiger Woods, ’98, who attended Stanford for two years, then left to pursue golf full time. Wie intends to get a degree, possibly in economics, international relations or psychology. “I felt like I accomplished part of that goal [with my acceptance], so that, to me, is very special.”

Wie’s not worried that her fame will get in the way of her Stanford experience. “Everyone has a unique, special quality, and it’s fun to see what everyone’s is,” she says. “I guess my unique talent is golf.”

Something More About Mary