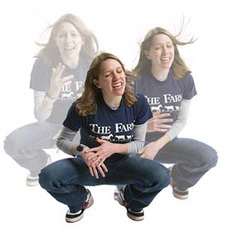 Wilmette, Ill., is not known as a producer of rap artists, but the quiet Chicago suburb is both the hometown and lyrical inspiration for K.Flay (Kristine Flaherty, ’07), who is busy defying rapper stereotypes.

Dubbed the “Suburban Rap Queen,” K.Flay sings about everything from frat parties to misogyny in the music industry, and peppers her songs with references to white-kid culture: “On a white picket fence/on a quaint brick street/Where I lay my beats.”

Her career as a rapper began freshman year when, on a whim, she wrote and recorded a song. Friends and dorm mates who heard it asked for more. Emboldened, Flaherty wrote lyrics for several songs, composed the electronic background music known as “beats,” and gave her first live performance at Cubberley Auditorium her sophomore year.

A website followed, a fan base developed, and reviewers took notice. Jots From the Flipside, a MySpace-based e-zine, described K.Flay’s style as “spitting lyrics that simultaneously shock and amuse like a rapping Sarah Silverman.” K.Flay’s debut music video, “The Funk You Need,” appears on YouTube, and she performed in Los Angeles in January.

A double major in sociology and psychology, Flaherty wants to parlay her early success into a career. “Rapping was way too much fun to ever pass up.  I love being able to channel my craziest thoughts into something that even my parents and their friends like listening to,” she says.