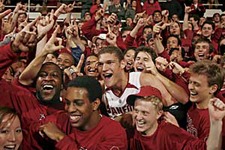 Freshman forward Brook Lopez knocked down the conference honor when he recorded Stanford’s first triple-double ever—18 points, 11 rebounds and 12 blocks—in the Cardinal’s 65-50 win over USC on January 25. Junior guard Candice Wiggins earned the recognition for a week in which she averaged 24 points, 5 rebounds, 4.5 assists and 2 steals while shooting 44 percent from the field and 93 percent from the foul line. It was Wiggins’s fifth Pac-10 career honor, and her second this season.

But head coach Trent Johnson was keeping his head down, keeping his players cool. “This is the time of the year when [rankings] can be really, really dangerous to young teams because it’s human nature to get caught up in what’s being said about you,” he said after the UCLA game. “This is late January, and you have to take care of the next game, the next opportunity, the next practice.” Two days later, the Cardinal would lose (90-86, in double overtime) to Gonzaga on January 31. “A tough, tough loss,” Johnson sighed. But the Cardinal bounced back with a 90-71 victory over Cal at Haas Pavilion on February 3.

Sophomore Lawrence Hill, who scored 24 points against Cal, has hit game-winning clutch shots this season and is first on the team in scoring (15.9 points per game) and tied for first in rebounding (6.5 boards per game). He seconded the approach of “Coach J.”

“It only adds to the distraction,” the 6-foot-8 forward said about the ranking. “We’ve got to keep it out of our heads.” Mid­way through the season, Hill downplayed the numbers and instead traced much of the team’s success to “the twins,” as they’re known around Maples—7-footer Brook Lopez and his brother, Robin. “Our team is a lot bigger than last year, and our size in defense has helped.”

After missing five games because of back surgery for an off-season injury, Brook Lopez has come back strong. “I got blood on my jersey,” he said, feigning indignation, referring to a recent rigorous team practice. He and Robin have started together and shared court time, rebounds, blocks and tipped-in missed shots. Did his brother deserve to be player of the week, Robin was asked. “It seems like they’re handing out these awards,” he deadpanned. “Just joking. He’s been trying to get back to 100 percent, and it’s well deserved.”

With a squad that includes five freshmen and five sophomores, Coach J could be looking at experienced starters for several years to come. “They should have all the energy in the world,” he said, prefacing his remark with a trademark “My goodness.” Going forward, Johnson added, keeping players healthy was a primary concern. “We’re pretty solid across the board, and I have a lot of trust in guys coming in and giving us a spark.”

Just past the midpoint in their conference play, the No. 11 Cardinal women also were keeping expectations level. “There are teams that can really challenge us, so we have to set the bar high for ourselves in terms of how we practice and how we play,” head coach Tara VanDerveer said before the team left for a road game in January. “I’m excited about how the team is improving, and if we could have everyone healthy, I couldn’t ask for more.”

Wiggins, the team’s consistent top scorer and perimeter shooter, was averaging 16.5 points per game, in spite of being sidelined in early January with a sprained right ankle. “And she’s had problems with a hamstring, too,” VanDerveer noted. “It’s challenging and frustrating for her.”

Earlier in the season, VanDerveer was pushing players to be more aggressive. “Offensively, I think people have been trying really hard to do the right thing,” she said after the victory over Santa Clara (88-56) in November. “Sometimes it’s been a little bit of paralysis by analysis, and I’ve reminded them that none of them were recruited for their defense, but that they have great offensive skills, and they need to shoot.”

Junior guard Cissy Pierce, who scored 14 points against Oregon (70-48) in mid-January, joined her teammates in being more aggres­­­sive, pressuring the ball, getting good looks and knocking down more shots. “The game is totally different when Candice isn’t healthy,” she said. “Other people have to step up.”

Senior center Brooke Smith collected a double-double against UC-Santa Barbara on February 1, with 16 points and 10 rebounds. And senior center Kristen Newlin contributed inside, with 10 points and nine rebounds. “We’ve seen every team now, and in the second half, teams start to really know the other teams,” Newlin said. “We have to hit shots and we have to play even better the second time around, especially when we’ve beaten teams, because they’re going to be wanting to get us at their house.”

VanDerveer said in January that all four freshmen are developing nicely, especially 6-foot-4 center Jayne Appel, who is third in scoring, with an average of 12.4 points per game. “Brooke is having a sensa­tional senior year,” the coach said. Sophomore forward “Jillian [Harmon] is playing really well, and [freshman guard] J.J. [Hones] plays really smart, passes the ball well, doesn’t force things and is leading the Pac-10 in assist-to-turnover ratio.”

Stanford beat No. 21 Cal (69-44) in early January, but in the opening minute of the home game against Cal on February 4, Hones suffered a season-ending injury, tearing the anterior cruciate ligament (ACL) of her left knee. The loss of the popular freshman point guard unraveled teammates, and Stanford lost 72-57, shooting an all-time-low 26.6 percent from the field and ending a 17-game winning streak. “It was really upsetting to our team to see J.J. go down,” she said. “But we talked about the fact that that happens, and we have to be able to play through an injury like that.”