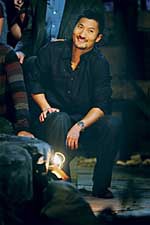 Add one more to the roster of Stanford alumni millionaires—but this one didn’t start a company or patent a medical device. Yul Kwon, ’97, took home the top prize on CBS’s Survivor.

The 13th edition of the popular series, this time set in the Cook Islands, received widespread attention for initially dividing contestants into race-based “tribes.” A lawyer and management consultant, the alliance-building Kwon earned the unwelcome nickname “The Godfather” on the show. Partway through the game he discovered an “immunity” idol that prevented his being voted off by other cast members, helping him reach the finals. He was named the winner in a 5-4 poll of those already voted off the island.

A symbolic systems major at Stanford, Kwon won the James Lyons Award for Service and graduated Phi Beta Kappa. He earned a law degree at Yale.

Kwon, the son of South Korean immigrants, told TV Guide his plans for the prize money. “I’d like to take care of my parents, I’d like to invest for my financial future and for my own family, and I’d like to spend a lot of time and some of the money helping out a lot of nonprofit organizations and charities that I feel very committed to.”