Mary Sprague, whose artwork infuses the ordinary with portent, turns her gaze on giant chickens. 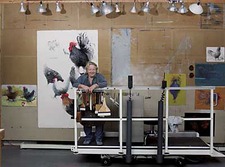 The soundin Mary Sprague’s studio is a soft scritch as she sweeps a stick of marigold-orange pastel across the rag paper pinned on her drawing wall, the gestures revealing the feathery form of an emerging character. The occasional huff of traffic rises from city streets below her third-story artist’s loft; the St. Louis sky—striated by slowly passing clouds—consumes three-fourths of the view from her south-facing windows. Sprague, ’72, has artist’s hands, well-muscled and unmanicured, and her light hair frames gently lined cheeks. Short and sturdy, there’s nothing particularly vivid about her—until she opens her mouth.

“The human figure—I’ve never been able to identify with it. I don’t do drawings of humans because they don’t tell you the truth. They give you all the details and information, but you’re just drawing about what genes a person inherited.”

Which may help explain why Mary Gibson Sprague, ’56, MA ’63, recently has been painting monumental chickens, birds about as tall as their “5-foot-nothing” creator. In five decades of making art, Sprague has combined the ethereal with the earthy, a saucy abandon with a steely discipline, creating paintings of seemingly ordinary subjects imbued with mystery and meaning. A catalogue of her work for a recent 40-year retrospective lists 24 solo exhibitions since her graduation from Stanford and institutional collectors ranging from the St. Louis Art Museum to the Nanjing Museum of Art in China.

The chicken paintings—many inspired by the exotic breeds photographed by Stephen Green-Armytage for his book Extraordinary Chickens—are a typical exploration of style and technique. They are so finely detailed that it seems a breath would ruffle their feathers, yet each was begun with a broad-brush swipe that was a thought in motion. “Motion is what it’s all about,” Sprague says.

Brimming with action and personality, the chickens become “all people I know.” She’s reticent about identifying her human inspirations—except for one, a rather perturbed-looking hen squawking on a nest. “That’s me.”

“Mary is a superb draftsman—she can draw like crazy,” says John P. Heinz, a law professor at Northwestern University and a longtime collector of Sprague’s art. “The craftsmanship comes through in all her work. Also, some of the exuberance of her personality comes across.... But not all of her work is exuberant. Those domestic interiors from the early ’80s—some of those are quite somber. Things become ethereal, some of them are very mysterious.”

Seeing beyond visible reality is a theme that has wound through Sprague’s work from the beginning. The interiors from the 1980s seem at first benign. Then details emerge, like the detonation next to a refrigerator in the monochromatic Little Bomb in the Kitchen, or the wafting spirit escaping from a bedroom drawer in Almost Certain. At the time these were painted, Sprague’s marriage was dissolving. Afterward, color and motion reasserted themselves in her work: “My images usually reflect what’s going on in my life, in one way or another,” she says. “Remoteness is a notion with which I do not identify.”

Because of her disdain for the human figure (though her 1964 series on Lady Godiva is insouciant—all rosy buttocks and red hair), Sprague often has depicted personality through furniture. She spent several months in a historic St. Louis residence called the Campbell House, home to a family of wealthy 19th-century merchants. “During the months I spent drawing there, I sensed several personalities,” she wrote in a 2000 essay. “There were servants and Mr. Campbell’s personality seemed huge, rather robustly wealthy.”

But she couldn’t find Mrs. Campbell. “She was lost in the pretty dresses in that elegant, well-run house. She was a type but she wasn’t a person.” Until, that is, a docent remarked that Mrs. Campbell had given birth to 13 children, including 10 who died and one who wasn’t “quite right.”

“Oh, I thought, that explains a lot,” Sprague says. Her subsequent “portrait” of Mrs. Campbell is a red velvet Victorian sofa half consumed in the flame-like folds of a gossamer dress. The title is Glimpse.

Daughter of an engineer in the Lighthouse Service and then the U.S. Coast Guard, Sprague grew up moving often and always on the water—Marblehead, Mass., Seattle, the Great Lakes and Northern California. “I wanted to be a seagull growing up, floating around beautifully on the wind, looking wonderful and having a great time on the beach,” she says. She also wanted to be a doctor and enrolled at Stanford because of the Medical School. “Someplace along the way, I figured out that art maybe helps people in a better way than fixing a bone does.”

She landed in St. Louis in the mid-1960s, intending only a temporary stay in the Midwest as she took a teaching job at St. Louis Community College. The decades passed. She must have known it would happen—a 1968 painting (the last she made in California) shows a rather frazzled woman in comic chiaroscuro, wearing a hat with a red flower. The title? What a Person Would Look Like if She Moved to Missouri and Taught for Thirty Years.

Sprague has lived and worked for 20 years in a cooperative of artists’ lofts in midtown St. Louis, purchased before a desolate area was gentrified. She paints from a seat on the Mary-lifter, an elaborate platform that moves backward and forward, up and down, at the touch of two levers. A friend had it made after he came into her studio to find Sprague—who has had back surgery—standing precariously on a stool and reaching for the far corner of a tall painting.

Making art is a form of muscle memory for Sprague. She had no experience with chickens that she could recall, until after she began painting them. Then she remembered being sent to the henhouse by her grandfather—and feeling engulfed by hungry creatures who seemed huge to the 4-year-old. She made a painting called The Wringer after a series of unfortunate events: In 1981, she slipped on ice and broke her left elbow. In 1982, she fell off a ladder into the bathtub while hanging wallpaper. In 1983, she broke her left collarbone in a spill from her motorcycle. A lefty, Sprague began to paint with her right hand after all those port-side injuries. “The facility you get with the hands is a mechanical thing,” she used to tell her students. “You can paint with your feet if you need to. It is, after all, the brain that makes the painting.”

Her drawing wall shows that the brain has been working on an 8-foot grouping of chickens in black and white, save for their red crowns. Why chickens? It’s a phase, Sprague says, begun about two years ago on a four-oil-change, 16,000-mile, three-month cross-country odyssey by art van. Her back pain was such that she was only comfortable in the driver’s seat of her van. So she outfitted it as a studio, packed a credit card and set off with the idea of finding “little animals in big places.”

“It was a fabulous trip. When I came home, I did chickens.”

Friends sometimes ask her how she feels, now that chickens have become her subject, when it’s time for fried chicken. “I feel really rewarded,” she says. And then she cackles.

KZSU Turns 60 with a Marathon

The beat goes on, soldering irons and all.