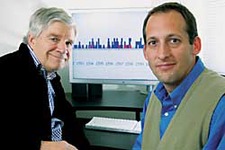 David Riggs had been kind to the new guy in the department, taking Matthew Jockers mountain biking to show him the best local trails. Then came the day when Riggs, a professor of English and a Shakespeare specialist, realized he could tap the young scholar’s expertise. Riggs was working on a new biography of the Bard, and he knew that Jockers, as the department’s ATS (academic technology specialist), could help him with his copious notes.

“David was doing a close, week-by-week look at Shakespeare’s life, and he used the word ‘timeline’ in a conversation we had,” Jockers recalls. “I immediately saw a visualization tool developing.”

Jockers designs computer-based programs that allow him to probe and analyze large literary databases. “The tools I build are for doing a particular kind of analysis that I call macro analysis—designed to find patterns and lack of patterns across large [bodies] of literature.”

In the 60-year history of the field variously known as humanities computing or digital humanities, Jockers says practitioners have developed “great tools.” But typically they’re programs that are used to analyze a single work of literature—by providing, say, a concordance for Moby Dick. The custom tools Jockers works on can sort through 250 novels per hour, and are the equivalent of thousands of concordances for thousands of books. “It’s not a tool that’s designed to help us understand Bleak House, but to see where Bleak House falls in the literary history of the 19th century.”

As he discussed the Shakespeare project with Riggs, Jockers visualized a timeline that would designate historical events in blue and publication dates of Shakespeare’s works in red. Places where the blue and red blocks overlapped or diverged prompted questions. “Why do we have a surge in publications from 1600 to 1601?” Jockers queries. “Why is nothing published after 1604, except for King Lear in 1608?”

Riggs looked at the timeline and saw “a great teaching aid,” one that he tested in his graduate seminar Who Was Shakespeare? “Any time we were looking at a play or an event, I could say, ‘What was he doing in April 1597?’ and click on the timeline, and all the information appeared on the screen,” Riggs says. “It was like I was able to take all my notes into the classroom, zero in on the part I wanted to use, and then get the students brainstorming along with me about what was happening at that point.”

As he continues to compile notes for his biography of Shakespeare, Riggs is adding new data to the timeline, including the dates of performances of the plays. He even has a dream of adding allusions to Shakespeare—“every time somebody mentions him”—to the timeline. “The goal is to go online, to make it a public access database, a resource for anyone, anywhere, who’s interested in the life of Shakespeare, or who’s teaching the plays and wants to be able to connect them to the life,” he told an audience at the IT Open House in November. “Stanford and the ATS program could sort of bequeath it to the scholarly world at large, as an instrument for collaborative research in the humanities.”

That’s proverbial music to the ears of the other 10 scholars who are assigned to departments and programs as academic technology specialists. Housed in, and in some cases partially paid by, the academic computing division of the Stanford University Libraries and Academic Information Resources, they once were known as “information specialists” and helped faculty find information in the libraries. Today, they continue to bring advanced degrees and significant academic credentials to their evolving technology responsibilities.

Take Jockers, who is a consulting assistant professor of English and specialist in Irish-American literature. Or Claudia Engel, a demographer who works with historical populations and is the ATS for the departments of anthropological sciences and of cultural and social anthropology. “We all have a dual background,” she says. “There’s the academic world, and the information technology world, and ATSes are the bridges in between.”

Engel teaches a seminar on Virtual Communities: Online Technologies and Ethnographic Practice, keeps up with technological innovations and stays abreast of research in the two departments she serves.

Engel has helped associate professor John Rick use advanced digital imaging to display archaeological data, and she’s shown associate professor Paulla Ebron how to work with wikis and so-called concept maps. “She teaches an introduction to cultural theory course, which is really hard stuff for undergraduates to read,” Engel says. But when students use “smart” whiteboards to position authors Karl Marx and Max Weber in their historical context, by key words, says Engel, “it’s quite chaotic, but engaging.”

A typical day for Joseph Kautz, ATS for the language center, finds him all over the digital map: setting up servers for instructors of more than 20 languages, teaching students of Japanese how to input Kanji, or creating items for online language assessment. A Slavist who taught Russian at the University of Washington for seven years, Kautz recently developed a multimedia Arabic alphabet project. Using QuickTime video clips that show an instructor’s hand drawing the character “Daal,” it teaches students how to write the Arabic alphabet by tracing over strokes projected on a whiteboard.

Working with Lyris Wiedemann, director of the Portuguese language program, and researcher Saori Fotenos, Kautz connected second-year Portuguese language students at Stanford with youngsters in a school for street children in Rio de Janeiro. The bloggers in the two hemispheres corresponded regularly, and children who previously hadn’t known how to write found new incentives to learn. “It was an interface that even children who were not literate could use,” Wiedemann says of the photos of Carnaval costumes and soccer logos that were exchanged. “The technology was essential for the project, but I thought it was fantastic that there was a purpose for using the language, to communicate with real Brazilians. Undergraduates especially are very idealistic and want to do something for the world.”

Vijoy Abraham works with faculty from seven departments who are affiliated with the Institute for Research in the Social Sciences, keeping them up to date on such technologies as wikis, blogs and RSS (really simple syndication) feeds. “It’s a small percentage of faculty who are tech savvy, so having someone who can bridge the gap between understanding the problems of a field and understanding the tools that can address those problems is really interesting,” he says.

Abraham also is enthused about a new physical space on campus that operates in the real world of Meyer Library. In a quiet corner on the second floor, the ATSes have assembled a computer, chairs and a coffee machine for their first-ever home. The “hive” is designed for socializing and impromptu meetings; cross-pollination is sure to follow.

Mary Sprague, whose artwork infuses the ordinary with portent, turns her gaze on giant chickens.