The Art of the Doodle

Dennis Hwang’s name may not be familiar, but millions of us recognize his drawings. 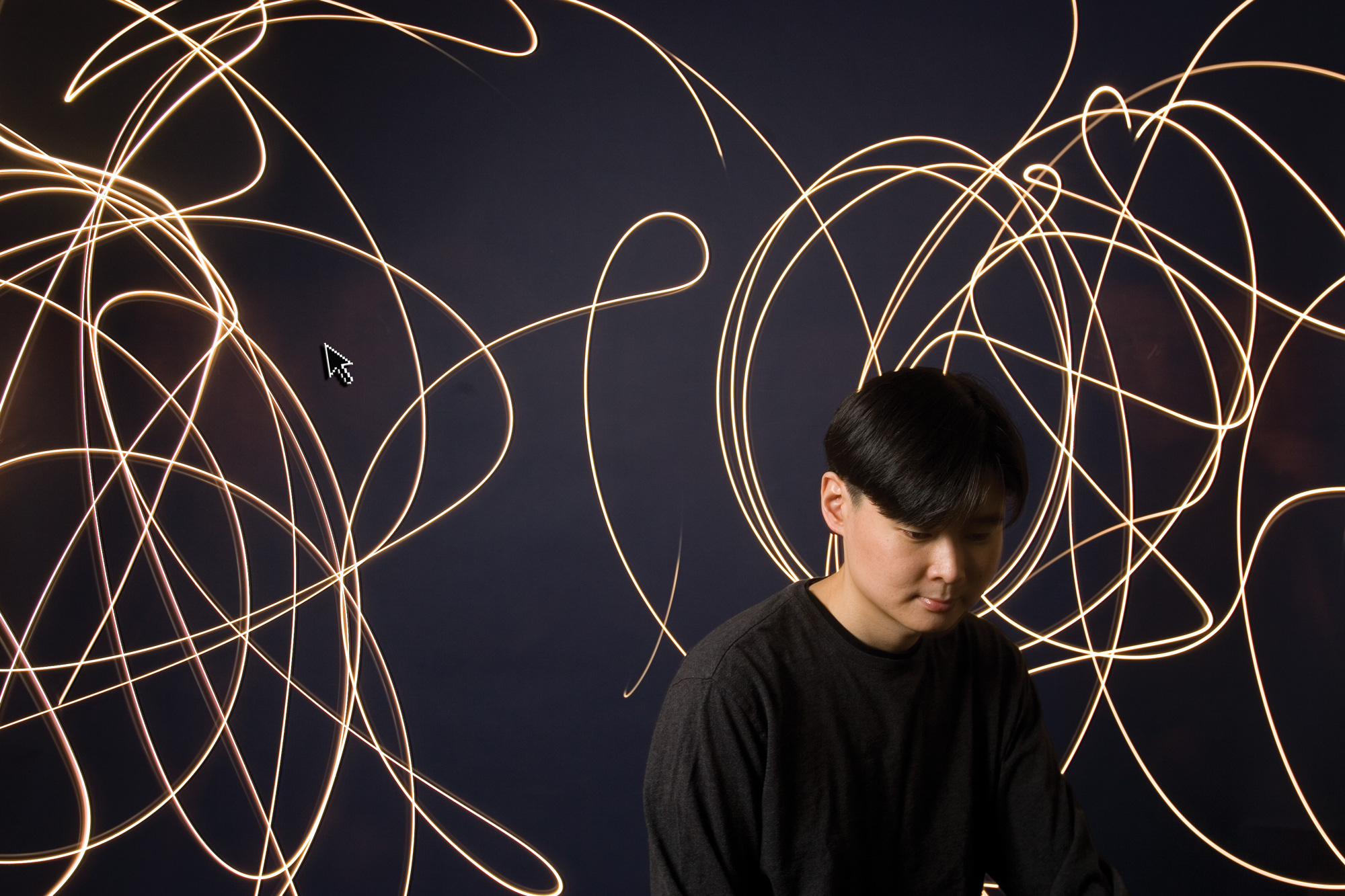 Every Stanford dorm seems to have that creative, go-to person. The felt-pen caricaturist who embellishes the hallway white board . . . the infuriatingly smart kid who cuts class to make posters for Big Game and still aces the midterm . . . the only one you’d trust to design the T-shirt.

“I was that guy,” Dennis Hwang, ’01, says with a grin. And in a near-perfect—not to mention lucrative—pairing of right and left brain (he graduated with a degree in art and a minor in computer science), Hwang is still that guy. Webmaster manager for the search engine powerhouse Google, Hwang is the “Google doodler”—the cartoonist who embellishes the firm’s wide-eyed typographic logo. With tens of millions of people viewing Google’s home page daily, the guy who used to design Burbank and Cardenal’s dorm shirts is, in CNN ’s words, “the most famous unknown artist in the world.”

Hwang, 28, manages a team of 23 people charged with keeping Google’s heavily visited pages technically fit, fast and sleek, but he also has charge of the whimsical drawings that adorn the Google logo on holidays such as Valentine’s Day, special occasions such as the Olympics, and offbeat little commemorations such as artist Edvard Munch’s birthdate. Hwang is modest about his celebrity, but admits he gets hundreds of fan e-mails every time a new doodle posts, sometimes thousands if he’s done something “particularly surprising,” he says.

As we sit in one of high-flying Google’s posh, free-to-employees cafeterias (fennel crème fraîche, anyone?), it’s a tad ironic when Hwang explains that he came to Stanford with “every intention of becoming a starving artist.” Hwang was born in Knoxville, Tenn., but he grew up in Korea, where his father was a professor of environmental geography at the University of Seoul. From his earliest years, Hwang was consumed by art, although frustrated by how it was taught in Korea. “They have a very methodical way of teaching. When you’re doing a still life, they expect you to accurately measure the dimensions so that, in the ideal situation, everyone’s work looks identical.”

His family moved back to Knoxville when he was in middle school. Hwang found himself speaking no English and “in a vegetative state trying to comprehend what was going on.” It didn’t take long for him to catch up academically. When it was time for college, he thought he wanted a pure art school, “but when I visited them, none felt like home,” he recalls. “The first place I went at Stanford was the art department and it just clicked. It’s a very free environment. The professors are almost like colleagues.”

Hwang immersed himself in fine art, but an introductory programming class taught by Robert Plummer soon worked its magic on him: “It’s designed to pull you in and make it fascinating,” says Hwang. He also was captivated by Professor Marc Levoy’s freshman seminar Science of Art. Levoy recalls two aspects of Hwang that still ring true: “He smiled a lot and he has a childlike exuberance.” Levoy still shows his students a short video every year that Hwang made for his class: a three-dimensional rendering of the precise perspective used in Renaissance painter Masaccio’s Trinity fresco. “It was really a tour de force,” says Levoy, because in 1998, creating a digital movie was not the snap it is now for the YouTube generation. “For a freshman to do that was quite extraordinary.”

In the summer after his junior year, Hwang’s former resident adviser in Cardenal, an early Google employee, convinced Hwang to take an internship as an assistant webmaster. His life has barely slowed since. “My senior year was basically devoted to Google. I was working 40 hours a week and going to school—an extremely chaotic time I would not like to repeat.”

At the time, Google, the brainchild of Stanford computer science graduate students Sergey Brin, MS ’95, and Larry Page, MS ’98, had fewer than 100 employees. Its home page featured stark and clean-lined, albeit colorful, graphics that stood out in a web world jammed with clutter, animations and annoying pop-ups. From the beginning, though, Google had a sense of humor. The first Google doodle appeared in 1998, when Brin and Page decided to leave the company untended for a couple of days while they attended the Burning Man festival in the Nevada desert. Brin put a little stick figure emblematic of the event on the Google logo as a clue to where they were. Users loved it, and soon the company hired an outside graphic artist to come up with other simple cartoons to mark special events.

Hwang’s original job involved straightforward programming chores, but soon he was charged with posting those doodles and “cleaning them up,” in programming parlance, so they looked better. After his modification of a Fourth of July doodle caught the founders’ attention, word of Hwang’s art experience and his talent got around. Pretty soon, Hwang became the official doodler, completing about 50 doodles a year.

About once a quarter, a group of executives get together to map out a calendar of doodle-worthy dates. Page and Brin have the final say, and they sometimes approve spontaneous drawings, such as when a Mars Rover landed. Hwang creates the images, using an electronic tablet and stylus for his sketches. The doodles are fun, usually whimsical—and sometimes baffling. Know about Gaston Julia, for example? Visitors to Google on February 3, 2004, saw the Google logo with a hurricane-shaped “o” against a backdrop of equations to celebrate the French mathematician’s birthday.

Clicking on a Google doodle will generate a page of search results designed to illuminate the subject matter—the significance, say, of the bottle of vinegar sketched into a Persian New Year doodle. Derivative websites like “Logoogle.com” have cropped up to feature humorous take-offs on the Google doodles, such as the Hooters restaurant chain owls’ eyes replacing the two Os in Google.

Google’s 2004 stock offering and subsequent stratospheric stock rise made billionaires of its founders and hundreds of millionaires among its rank and file. These days, Google is bursting at the seams of its Mountain View “Googleplex” headquarters, where employees jostle for parking spots (a valet will take care of you for $20), lunchroom seats and conference-room space. Googlers ride Segways and motorized scooters around the campus. Around Silicon Valley, real estate agents still talk about the high cost of housing being propped up by “the Google factor.”

Hwang’s office, however, is unprepossessing. A large, three-paned computer screen is the dominant feature in a space otherwise jammed with overflowing boxes. Next to his keyboard is the electronic tablet he uses to create his art. In a box behind him is a poster a fan sent him that features virtually all of his Google doodles over the years, lovingly assembled. “This took a lot of time to put together,” he says.

Also on his desk is a mug from the March of Dimes that provokes a wince. Last year the March of Dimes staged a public-relations campaign to get Google to offer a doodle promoting its project to raise awareness of premature births. Eventually, the group collected more than 75,000 signatures. Hwang does occasionally use suggestions from outside the company, and Google even held a Google doodle contest for British schoolchildren when it opened a U.K. office in 2005. But he didn’t accommodate the March of Dimes’ request because there are two hard and fast rules about the doodles’ subject matter. First, they avoid religious subject matter. Christmas, for example, is usually handled with secular images like snowmen or icicles. Second, the logo artwork is meant to be “fun and about Google, not about corporate beliefs or causes we support,” he explains. “We are not going to trivialize something that is extremely worthy by reducing it to a doodle. It’s why we won’t do a 9-11 doodle, for example. It would trivialize the event.”

Surrounded by over-the-top Valley culture, Hwang seems unaffected by his star status. Although he has little free time, he tries to “keep up with the latest tools” in computer animation. His most difficult doodling tasks, he says quietly, involve honoring artists whose styles he has studied and admired for years, such as Claude Monet. Amid an almost infinite supply of people and events to doodle, “artists’ birthdays are the most precious to me,” Hwang says. “I’ve always studied art history and trying to imitate their style is the most pressure.”

Joan O’C. Hamilton, ’83, is a frequent contributor to Stanford.