Our Seniors Have Left Some Heart' 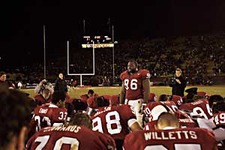 Near the top of the fourth quarter November 26, with 56,057 fans watching, senior cornerback T.J. Rushing snagged the kickoff and ran as if it were—well, the last game ever in Stanford Stadium. Senior wide receiver Marcus McCutcheon blocked a Notre Dame defender and Rushing dashed through the hole for an 87-yard return and a touchdown to bring the Cardinal within two points.

“To me, that was one of the most exciting moments in the game,” says head coach Walt Harris. “I would say the stadium was rocking, and we’ve got to capture some of that spirit and bring it out again. We’ve got to throw some touchdown passes and light them up on kickoff return and do things that excite people [and make them] want to come back.”

In his first year on the Farm, Harris led the Cardinal (5-6, 4-4 Pac-10) to its first five-win season in four years, highlighted by hard-fought road victories against Navy, Washington State, Arizona and Oregon State. “I was most proud of the fact that when we got drilled, the next week we came back,” he says. “We played through a lot of injuries, with a lot of banged-up, beat-up people, and a lot of young men stepped up. You don’t have to be a dreamer to think we could have won eight games. It was tangible—we had a shot at it.”

The season that started with a 41-38 victory at Navy was followed by what Harris calls “the infamous game”: a 20-17 home loss to UC-Davis, which is making the transition from Division II to Division I-AA. The Cardinal also dropped the Pac-10 opener against Oregon, 44-20. But the following week, spurred on by “UC-Davis” taunts from the hometown crowd in Martin Stadium, Stanford recorded its first conference win, over Washington State, 24-21. The offense played with increasing confidence, beating Arizona 20-16 and Arizona State 45-35.

Against the unbeaten UCLA Bruins October 29, the Cardinal was up 21 points with 8:26 remaining, then saw victory slip away, losing 30-27 in overtime play. The following week, the No. 1 USC Trojans took the lead in the first four minutes and never yielded, winning 51-21. Stanford notched just one more win in the season—a 20-17 squeaker over Oregon State, in which senior quarterback Trent Edwards left the game with an injury to his nonthrowing hand.

In the 108th Big Game November 19, Edwards suffered a shoulder injury; the Cardinal’s only score came on a 37-yard field goal by senior Michael Sgroi; and the Bears retained the Axe with a 27-3 win.

The final game against Notre Dame was a heartbreaker, as Stanford’s defense struggled to hold the line against a team ranked sixth in the nation. With 1:46 remaining, the Cardinal pulled ahead, 31-30, on redshirt sophomore quarterback T.C. Ostrander’s dramatic 76-yard pass down the sideline to junior receiver Mark Bradford, followed by a four-yard TD pass to senior tight end Matt Traverso. But the Fighting Irish rallied in the final 55 seconds to win 38-31. The Cardinal “got hit in the mouth, figuratively, and they hit back,” Harris says. “I was impressed.”

The following day, seven of his assistant coaches boarded red-eye flights to the East Coast to scout prospective recruits to fill the vacancies left by 18 graduating seniors. “Some of the hardest stuff to replace is their commitment and the effort they played with,” Harris said. “That’s something our seniors have left—some heart.”

Nose tackle Babatunde Oshinowo, who collected 54 tackles this season, including three quarterback sacks against Arizona State, concurs. If Oshinowo were out recruiting, he’d be looking for “people who are going to work hard, who aren’t going to quit,” he says. “There are always going to be ups and downs in football, but you have to stay constant,” says the senior electrical engineering major, who expects to be drafted by the NFL in the spring. “When you have tough times, that’s when you have to focus on recommitting and giving your all.”

If your engine block isn s lots to love about Alaska.