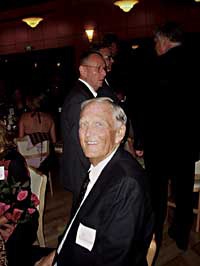 In Silicon Valley boardrooms, Alfred P. Hildebrand was a pioneer in the field of lasers, helping bring to market items we now take for granted like the supermarket scanner and the laser printer. On the playing field, he made his mark as a football and rugby star, at one time signing with the NFL. And at home, Hildebrand was a devoted father, helping his two youngest daughters navigate their way through adolescence after the death of their mother.

An entrepreneur and active director of more than a dozen technology firms, Hildebrand died October 20 of cancer at his Palo Alto home. He was 63.

Hildebrand, born in Houston, was a graduate of St. John’s School and maintained lifelong relationships with friends there. At Stanford, he was a member of the Delta Tau Delta fraternity and a physics major. “Big Al”—he was 6-foot-6—earned honorable mention All-American honors in football and was a key member of the Stanford rugby team that dominated the sport in the early ’60s. He signed with the Houston Oilers, but a knee injury cut short his time in the NFL.

Hildebrand worked to identify promising uses for lasers and bring them to fruition. At Spectra-Physics, he was instrumental in putting the supermarket scanner into production. He was awarded a patent for this work (“A Method & Apparatus for Reading Coded Labels”) in 1977, and his contribution is acknowledged in a display at the Smithsonian Institution’s National Museum of American History. Hildebrand also worked on applications of lasers in printing and in three-dimensional solid modeling systems. In the past 15 years, Hildebrand worked with optical and electronics companies including Silicon Light Machines, Inviso, Nanogear and Iridigm Display Corporation. Mike Hodges, a longtime colleague, remembers Hildebrand as the bridge between a cool technology and a real-life application, “connecting the nerdy engineer with an in-the-ozone visionary.”

Hildebrand’s younger children, Eden and Erin, were 11 and 12 years old when his wife, Elsa, died in 1992. Hildebrand juggled both girls’ schedules on back-to-school nights, chaperoned the girls and their friends on vacation in Mexico, Lake Tahoe and Hawaii, and wrote emotional letters read to them when they pledged their sororities at UC-Santa Barbara. Erin Hildebrand remembers her father as a Renaissance man, composing crossword puzzles, fashioning his own croquet mallets, and tiling and plumbing his own hot tub.

Notes from the Shoeboxes