It’s a bowl of thinly sliced pig ears, dusted with flour and semolina and deep-fried until crunchy. And to be fair, I sampled them while they were being prepared, so I’m at an advantage over my husband, who has bravely agreed to join me for a special dinner. The 100-seat Noe Valley restaurant usually serves relatively familiar Italian food. But one night a year (the upcoming one is March 6), Pastore embraces respect for the whole animal in a way few other restaurateurs would. The event is called “Dining from Head to Tail.”

No, it’s not eating the entire animal.

Hunched in his low-ceilinged office over the restaurant, Pastore, ’89, says he’s had a lifelong love of food, but it was Stanford in Italy that made him think about the way we eat and how food is connected to daily life. When he returned to the States, he became a “consumer of cookbooks.” Then in June 2002, after a 13-year career in high tech, he opened Incanto. He wanted work more grounded in his local community, and starting a restaurant let him indulge his love of food.

Sustainability is the guiding philosophy at Incanto, though Pastore is quick to call the word itself something of a term du jour. “I think anybody who has a conscience who works in this business . . . at one level or another you’re going to care about the food, its place in the world and all the people whose lives are touched by it,” Pastore says. His restaurant strives to be as environmentally responsible as possible. “It’s something that we do because we care about our community and we care about the planet.”

Take, for example, the sparkling water we are served with our meal. It is local Hetch Hetchy water, straight from the tap, that has been run through a commercial filtration system, prechiller and carbonator located behind a vast wine collection. The system eliminates the need to buy heavy glass bottles of water that would be shipped across the country and end up in a landfill or recycling plant. “For water, this is as sustainable as it gets,” he says. “[It’s] much more energy efficient in every respect.”

A tripe salad arrives at the table: un-bleached, Prather Ranch honeycomb beef tripe with a lemon and parsley dressing. My husband and I raise our eyebrows at each other and then go to it. It has the texture of shaved meat and is light and refreshing—nothing like what most diners would expect from a cow’s stomach lining.

Offal ‘doesn’t taste like the rest of the meat. The texture’s not the same. You’ve increased your flavor level.’

Serving such disdained cuts of meat values the whole animal and educates diners, Incanto chef Chris Cosentino explains. “Sustainable eating is using everything. The animal is not there for you to kill just to eat the tenderloin.”

These meats are also, to Pastore and Cosentino, just plain good eats. “Our main mission,” Pastore says, “is that these truly are delicious foods and if you want to really experience what it’s like to eat meat, it doesn’t just stop with the flavor of steak and hamburgers.” Cosentino points out that when you get to the fifth quarter of an animal (we typically eat the first four quarters—the fifth is inside), “it still may be from a pig or a cow, but it doesn’t taste like the rest of the meat. The texture’s not the same. You’ve increased your flavor level.”

Music plays softly and the dining room, decorated with heavy curtains and framed 16th-century Latin parchments, is beginning to fill. At the next table sits the chef from Boulevard (routinely regarded as one of San Francisco’s best); across the room dines Fergus Henderson, a London restaurateur considered the godfather of whole-food cooking. This is the kind of crowd the $60 head-to-tail meal pulls in, because many everyday diners wrinkle their noses at the mere mention of kidney pie. “There are a lot of people in their 30s that I meet who have never tasted a liver,” Pastore says, “let alone heart or brains.”

The pig’s-brain bruschetta has a flavor that most people are unfamiliar with and, frankly, scared of. But given the company we are in and our pleasure in the previous dishes, my husband and I bring the toasts to our lips as if about to indulge in fine caviar. The creamy, fatty texture is so distinct that the wary novice can’t help but be conscious of the fact that this is brain. Still, pan-seared and served on grilled bread rubbed with garlic and lemon, brain is like any other acquired taste. Its buttery smell makes you want to give it a chance—and many patrons have. Pastore mentions a couple who, after sampling offal dishes from Incanto’s regular menu, have come for the whole five-course experience tonight.

Next we are served strips of grilled lamb heart laid on a pea-and-fava-bean mash with mint-horseradish salsa. Cosentino doesn’t use plating and presentation to camouflage what he is serving (after all, if you want disguised offal, there are great hot dogs out there). The heart has the texture of filet mignon, and the flavors of meat and mash thrill the Texan (that is to say, the meat lover) across the table. The salsa’s mint was grown in Incanto’s rooftop garden. Pastore hopes to grow his full fresh supply of high-impact herbs—those, like nepitella, thyme and sage, that are used in relatively small quantities. The garden also is “softening the view” for the many apartment dwellers who overlook what could be another ugly rooftop. 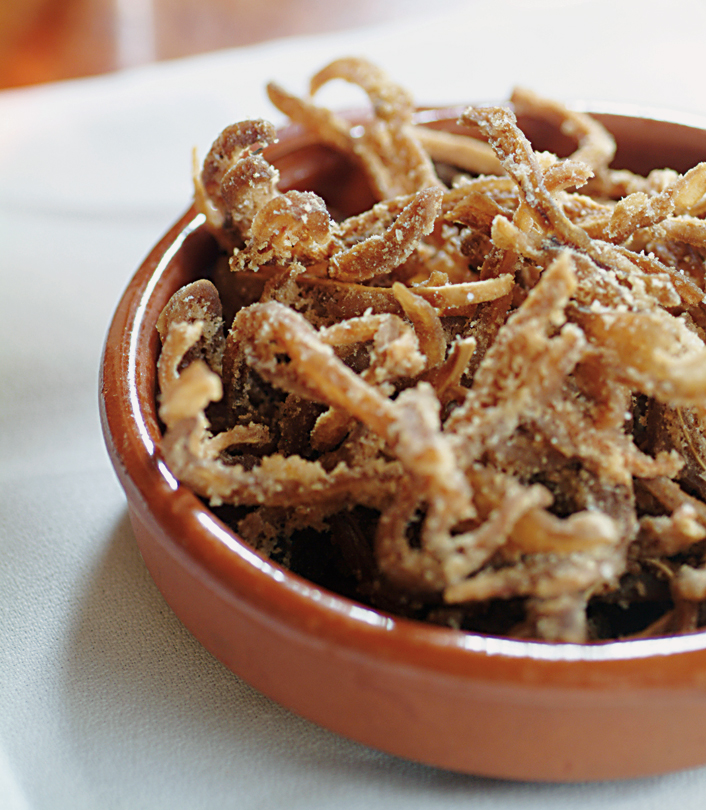 SAY WHAT? Incanto’s sliced pig ears are dusted with semolina and deep-fried.

Walking through the restaurant, Pastore passes a room near the back door where stacks of cardboard boxes sit. Seventy to 80 percent of Incanto’s produce comes directly from farmers, rather than from distributors. The produce boxes are coated with wax to stay intact while traveling—and the wax makes them not recyclable. So Pastore returns boxes to the farmers for re-use. Next to the boxes are green plastic strawberry containers and bags stuffed with rubber bands, twist ties and plastic bags, also painstakingly returned to the farmers.

Incanto’s dining room is in full swing by the time the very flavorful braised pork testa (head), grilled pork liver and chitterlings (pork intestines that have been cleaned, poached and fried in lard) arrive. Pastore chats with patrons at the front of the room, near a case where Cosentino keeps house-cured meats. The wait staff is buzzing about, delivering Cosentino’s unusual dishes to an eager audience. Incanto’s full-time staff, including dishwashers, receive comprehensive medical benefits, thanks to a 5 percent service charge added to every bill and Pastore’s concern about wage inequities in San Francisco’s restaurants.

Despite Incanto’s accomplishments (most recently, the restaurant became the first in California to be “certified humane” by the nonprofit animal-welfare organization Humane Farm Animal Care), Pastore is still learning the business day to day. In a city where the competition is abundant and the dining public is choosy, creating a thriving restaurant is no small challenge. Some of Pastore’s practices do not put a restaurant on the fastest track to profitability. “But if your goal is to balance the realities of commerce of a restaurant with the ideals of beauty and making the world a better place and doing the right thing, then it is a natural fit for how to choose to run your restaurant,” he says.

We can raise our chocolate blood pudding to that.

Note: Tripe is the lining of a cow’s stomach; honeycomb tripe, from the second chamber of the stomach, is considered the most tender and flavorable. Use unbleached, organic tripe, if available.

Rinse tripe very thoroughly with cold water until water runs clean and there is no detectable grit.

Combine all ingredients for the tripe cooking liquid in a large, non-reactive stockpot. Add the tripe and bring to a boil. Lower heat to a simmer and cook for three hours until tripe is very tender.

To make vinaigrette and prepare salad:

Mince garlic and place in a small mixing bowl with salt, chilli flakes and zest. Add lime juice and vinegar and let marinate for five minutes. Whisk in extra-virgin olive oil and season to taste.

Toss cooked tripe in vinaigrette, adding a little at a time until it reaches desired acidity. (You will have some vinaigrette left.)

With remaining vinaigrette, dress potatoes. Toss potatoes with marinated tripe. Serve with a generous pinch of rough-chopped Italian parsley and a drizzle of extra-virgin olive oil.