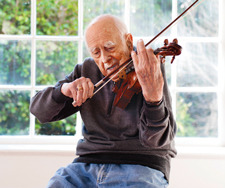 In an article published on Today.com in 2014, Ephraim Engleman said he planned never to retire; he was 103 at the time. Not surprisingly, the world-renowned rheumatologist and concert-trained violinist also said he didn’t pay much attention to age—he was too busy to dwell on a number. His book My Century looks back on a life well lived and includes tongue-in-cheek tips for longevity, such as pick your parents, avoid vitamins and organic foods, and exercise only if you must.

Engleman, ’33, died on September 2 after collapsing at work at UCSF. He was 104 and lived in San Mateo.

Born in San Jose, Engleman was the son of a Russian immigrant father; his mother taught him to read music before he learned English. By 16 he was playing the violin as an accompanist to silent movies, and he played in the orchestra at what is now the California Theatre. He enrolled at Stanford, where he majored in biological sciences, but he also made sure to keep playing music and was emcee for Gaieties in 1932. While living in Palo Alto, Engleman made friends with Lucie Stern, a local arts patron and philanthropist who had attended Columbia University. Engleman suspected she facilitated his admission to Columbia, where he earned his medical degree before completing a fellowship in rheumatic disease at Massachusetts General Hospital. He returned to the Bay Area for an internship at Mount Zion Hospital and met Jean Sinton on a blind date in San Francisco. They married in 1941, and this December she will celebrate her 100th birthday.

After serving in World War II as chief of the Army’s Rheumatic Fever Center, Engleman joined the clinical faculty at UCSF. He was a leader in the field of rheumatoid arthritis, winning numerous awards and chairing the National Commission on Arthritis in 1975-76. Through his work, he met the actress Rosalind Russell, who was disabled by the disease, and in 1979 Engleman was named director of the Rosalind Russell Center at UCSF. He was the recipient of the Presidential Gold Medal Award of the American College of Rheumatology, among other honors.

Throughout his life, he practiced the violin every day and played with the San Andreas String Quartet, a band he helped form. He owned several rare instruments, including violins made by Antonio Stradivari and Guarneri del Gesù, some of which were exhibited at the Metropolitan Museum of Art, in New York.

“My father was an extraordinary man,” says Engleman’s son Edgar, a professor of immunology and rheumatology at Stanford. “Not only did he motivate my brother and me to become physicians, he was also an inspiration to the senior faculty at both Stanford and UCSF because they saw how productive and influential he was for a very long time at an advanced age.”