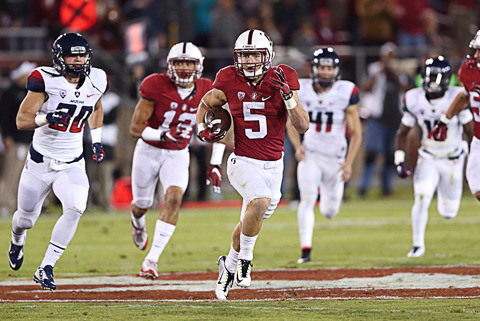 Sophomore running back Christian McCaffrey has been showing up in Heisman Trophy watch lists lately, as well he should. As an adjunct to sweating over problem sets and making the world better for children in Rwanda, he has made life miserable for opposing defenses with his combination of speed, elusiveness and versatility. Some right-thinking people are beginning to suggest that he is the best college football player in the land, and we heartily agree. Here are eight reasons we think McCaffrey belongs at the top of the Heisman list.

McCaffrey leads the nation in all-purpose yards. Through nine games, he has amassed 2,174 combined yards in rushing, receiving and returns, an average of 241 per game. Nobody else is even close.

In fact, he is having a historic season. McCaffrey has a chance to break the single-season all-purpose yardage record set by Barry Sanders (3,250) in 1988. It is one of the longest-held records in the book. Barring injury, McCaffrey will almost certainly break the all-time single-season mark in the Pac-12, jointly held by Marcus Allen and Marqise Lee of USC.

Stop him one place, he’ll hurt you in another. While his stats are impressive, what they really reveal is that McCaffrey is the most versatile offensive player in the nation. He can beat teams in more ways than anyone else currently in the Heisman conversation. He runs out of the “I” behind a fullback, takes direct snaps in the wildcat, lines up as a slot receiver, and returns punts and kickoffs. He disrupts defensive schemes and creates opportunities in Stanford’s pro-style offense that otherwise wouldn’t exist. In short, he does what all great players do: He makes players around him better.

Besides, some stats lie. McCaffrey’s only statistical nit is his small number of touchdowns scored, but that’s an anomaly that is easily explained. Stanford head coach David Shaw has elected to use running back Remound Wright in short-yardage situations near the goal line. As a result, McCaffrey’s touchdown total is deceptively low. Through nine games, Wright had scored 11 touchdowns, nearly all of which were 1- or 2-yard runs set up by McCaffrey.

Players like McCaffrey have won the Heisman before. Desmond Howard, who won the award in 1991, was a wide receiver who also returned kicks and, like McCaffrey, forced defenses to account for him wherever he was on the field. Reggie Bush, who won in 2005 (and later gave it back after recruiting improprieties surfaced) was used much like McCaffrey in multiple formations and on special teams. McCaffrey’s numbers are comparable to theirs—and in some cases even better.

He’s the best player on one of the best teams in the country. Stanford’s middling 8-5 record probably cost Toby Gerhart the Heisman in 2009, when the Cardinal running back lost to Alabama’s Mark Ingram by 28 votes, the smallest margin in history. Heisman voters won’t have that excuse this year if Stanford keeps winning, especially if they make the playoff.

C’mon, what can’t this guy do? McCaffrey is a fine student, he plays a mean piano, he has done charitable work in Africa. And his jersey number is 5—a prime number, a number worthy of celebration (high five!) and the number of stars reviewers give to something really, really good. Like Christian McCaffrey.