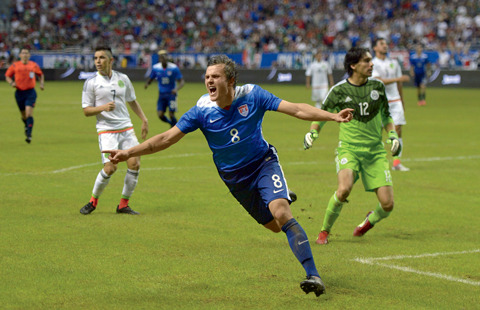 From his earliest moments  on the Farm, Jordan Morris has played like a force unleashed for Cardinal soccer. His first two goals for the team, in 2013, cinched a dramatic win in overtime over UC-Santa Barbara.

But his most fateful goal for Stanford may well be one that officially counted for nothing. The spring of his freshman year, the U.S. men’s national team was holding camp on campus ahead of the 2014 World Cup. Stanford was invited to a closed-door scrimmage against the professionals. And there the freshman forward put one past the U.S. keeper.

It was a clear cause for celebration, but Morris’s hopes for any concrete consequences were limited, save perhaps one. He was on the hook to perform in the Stannys, the athletic department’s awards show—a horror for someone with little taste for the spotlight off the pitch. His teammates had dangled an escape: Score twice in the scrimmage and he’d be free. Suddenly that looked less impossible.

It didn’t happen, but something far more important did. His play caught the attention of U.S. head coach Jürgen Klinsmann. A few months later, Klinsmann invited Morris, his father and Stanford head coach Jeremy Gunn to the Four Seasons in Palo Alto to present Morris with the stunning opportunity to join his squad.

When Morris came on for the final 17 minutes against Ireland last November, he was the first active college player to see action for the U.S. men since 1995. The bigger story followed in April, when Morris got his first start in the showdown against archrival Mexico (above).

Walking out in front of 64,000 fans was like nothing he’d experienced; he could hardly shoot straight during warm-ups. But he settled down, and shortly after halftime, he pounced on a deflection outside the penalty box and powered the ball through the legs of the Mexican goalie. The Americans ultimately added an insurance goal, but the stories were dominated by the heroics of a player who might have won Budweiser Man of the Match if only he’d been 21. 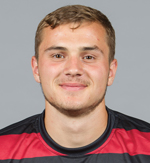 So began a magic month for Morris that included again scoring against Mexico for the Under-23 U.S. team and rejoining the full national team for historic victories against World Cup champion Germany and perennial power Netherlands, where Morris laid down the game-winning assist.

The ensuing hoopla propelled him into territory normally reserved for basketball and football stars: the highly scrutinized choice between school and the beckoning professional life. His hometown team, the Seattle Sounders, has long made clear its interest.

But he’s in no hurry to leave Stanford, which he says has been his dream school since eighth grade. Next summer, he may well be at the Olympics, and then he’s leaving all options open. In the meantime, he’s focused on Stanford and getting into the NCAA playoffs for a third straight year, though his availability will be reduced by international commitments.