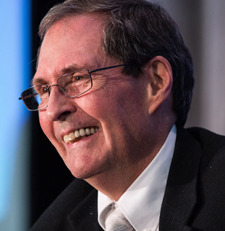 “This government, as promised, has maintained the closest surveillance of the Soviet military buildup on the island of Cuba.” When President Kennedy spoke these words in October 1962, John Steinbruner was an undergraduate at Stanford. But decades later, he would pinpoint that moment as the “catalytic experience propelling me out of psychology and into public policy.”

A university professor and longtime Brookings Institution leader, John David Steinbruner, ’63, died on April 16 at his home in Washington, D.C., from multiple myeloma. He was 73.

After receiving his bachelor’s degree in psychology, Steinbruner decided to take a break from the subject. He later explained that Stanford’s policy at the time was not to accept its own undergraduates into the graduate psychology program, and he opted to stop rather than study the subject elsewhere. Instead he entered MIT’s doctoral program in political science and then took a teaching position at Yale. He switched paths again, when, at 37, he was asked to lead the Brookings Institution’s Foreign Policy Center.

At Brookings, Steinbruner married his training in psychology and political science to analyze one of the 20th century’s weightiest policy challenges: decisions made by governments about weapons that could, if deployed, end the world. It was his contention that the complex nuclear arrangements between the United States and the USSR could lead to peace only if the players acted rationally—but people don’t always make rational decisions when they’re operating under pressure and fear (created under threat of nuclear catastrophe). That meant, in effect, that one bad decision or rogue missile could lead to utter global crisis.

And yet, despite the dark implications of Steinbruner’s work, “You’ve never met a human being who was so confident that everything was going to be fine,” says Jeffrey Lewis, director of the East Asia Nonproliferation Program at the Middlebury Institute of International Studies at Monterey’s James Martin Center for Nonproliferation Studies, and a former student of Steinbruner’s at the University of Maryland.

That confident optimism was a hallmark of Steinbruner’s teaching when he left Brookings in 1999 for Maryland, where he also led the Center for International and Security Studies. In the classroom, Steinbruner’s selfless dedication to his students earned him wide respect; in his last years, he was known to schedule his cancer treatments around his classes so as not to miss any.

Those interactions were “life-changing,” Lewis says. “There was just nobody like him.”

Steinbruner is survived by his wife of 26 years, Cris; two sons from his first marriage to Maureen (Strain, ’63), David and Gregory; one stepdaughter, Gretchen Gobin; and five grandchildren.

Mike Vangel is the editorial assistant at Stanford.