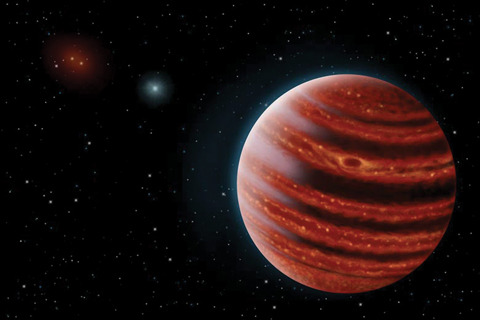 NEWCOMER: The recent find is less than 25 million years old; Jupiter is about 4.5 billion. Photo: Danielle Futselaar and Franck Marchisp

NEWCOMER: The recent find is less than 25 million years old; Jupiter is about 4.5 billion. Photo: Danielle Futselaar and Franck Marchisp

Did you know there are more young stars closer to Earth in the Southern Hemisphere? That’s part of the reason a team of astronomers located its groundbreaking planet-spotting device on a telescope in the arid mountains of northern Chile. Their goal is to observe 600 stars in a three-year period, searching around them for faint, young planets that could shed light on how solar systems form, and whether there are other solar systems like ours.

The 88-member team and its device, the Gemini Planet Imager (GPI), announced in August its first success last December with the discovery of a Jupiter-like planet (called 51 Eridani b) 96 light-years away near the star 51 Eridani.

The giveaway was the level of methane in its atmosphere.

“The reason we’re sure it’s real is this methane spectrum stuff—stars don’t have methane,” says Bruce Macintosh, principal investigator on the project and a Stanford physics professor. Different gas molecules absorb different wavelengths of light; GPI’s advanced optics system uses an infrared spectrograph to measure the wavelengths of light for every pixel in its field of view. The team knew it was seeing methane because the gas strongly absorbs light with wavelengths between 1.65 and 1.80 microns.

GPI’s ability to directly image distant planets is a significant step forward in our study of the universe. Until recently, astronomers could observe only planets that orbit very close to their stars, by watching for shadows passing in front of those stars. GPI instead detects infrared light from the planet itself. Only young planets, still glowing from the extreme heat of formation, emit significant amounts of such light.

Observing infrared light allows astronomers to measure planets’ temperature and size and determine their composition. Macintosh’s team estimates 51 Eridani b is less than 25 million years old, with clouds that heat to nearly 400 degrees Celsius; Jupiter, by comparison, is roughly 4.5 billion years old and -145 degrees Celsius at its cloud tops. But the planets are relatively similar in size and orbit: 51 Eridani b appears to be at least twice as massive as Jupiter and about 2.5 times farther from its star.

What scientists don’t yet know is how 51 Eridani b formed. Was it like the planets orbiting our sun, which astronomers believe built up rocky, icy cores over millions of years? Or was it by the sudden collapse of diffuse, swirling materials thought to form far-flung gas behemoths?

51 Eridani b can’t be observed between February and July because of the position of its sun. When Macintosh returned to the Gemini telescope in August, with three Stanford postdocs and a summer intern, he caught just his second glimpse of the planet, on the last two hours of his last night there, when the weather and atmospheric conditions finally allowed it. He could tell it was orbiting—the planet had moved over the course of the year. The team collected data for further analysis.

“The really big question is, ‘Are there other Earths?’ The answer is we don’t know,” Macintosh says. “The real holy grail is directly imaging a planet that’s like Earth.” They’re looking for similarities in size, composition, temperature and atmosphere—qualities that might signify, or support, life.He predicts that feat will require either a space telescope or a much bigger telescope on the ground.

On the same Chilean mountaintop where the Gemini South Telescope is located, the Large Synoptic Survey Telescope is under construction. Beginning in 2022, the telescope is expected to record images of the entire visible southern sky every few nights and catalog tens of billions of objects. One of its hallmarks will be its camera, which will be built at SLAC National Accelerator Laboratory. The digital camera will be the world’s largest, taking images at a resolution of 3.2 gigapixels (about 400 times the resolution of an iPhone 6 camera) and weighing more than 3 tons.