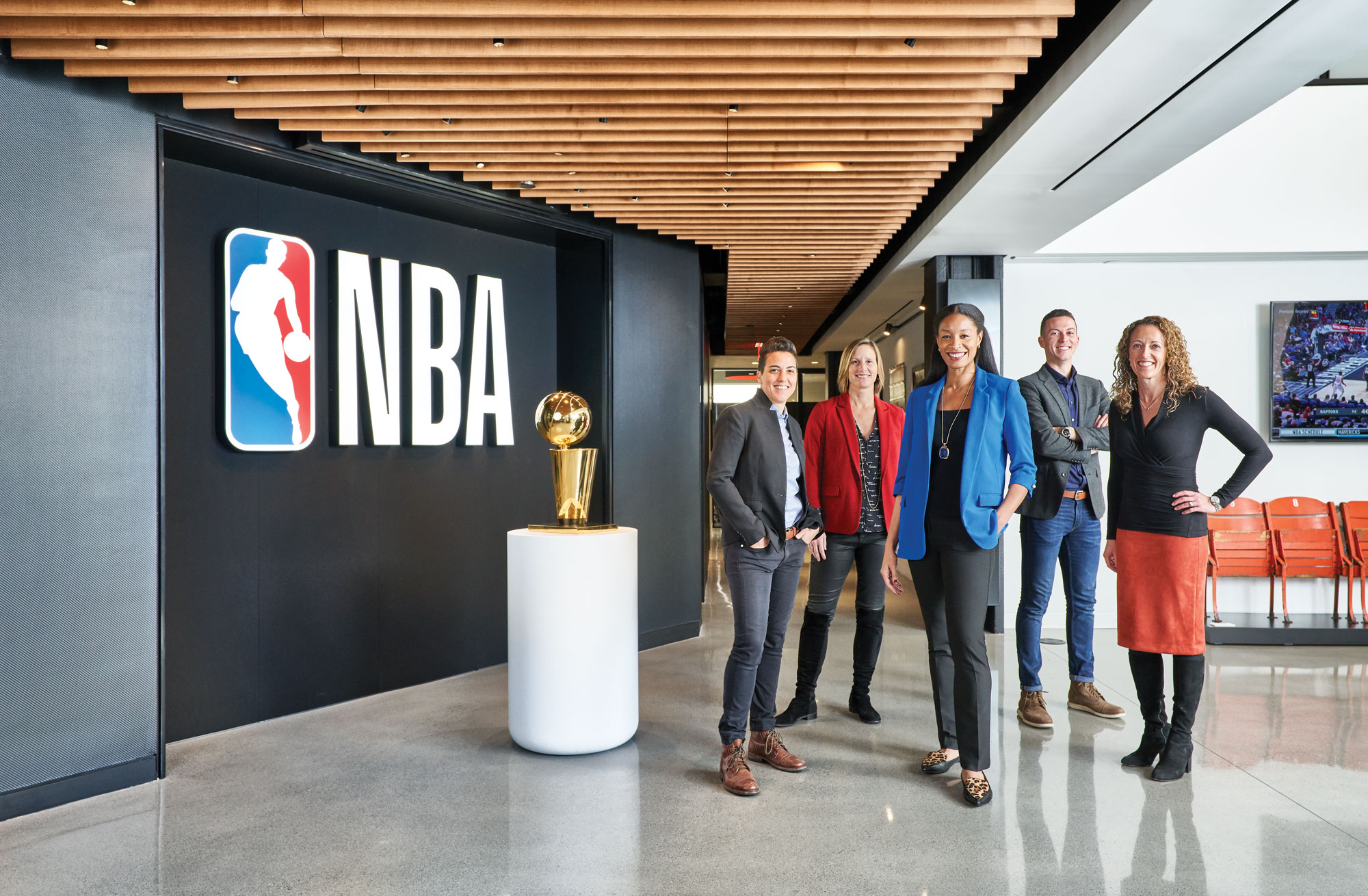 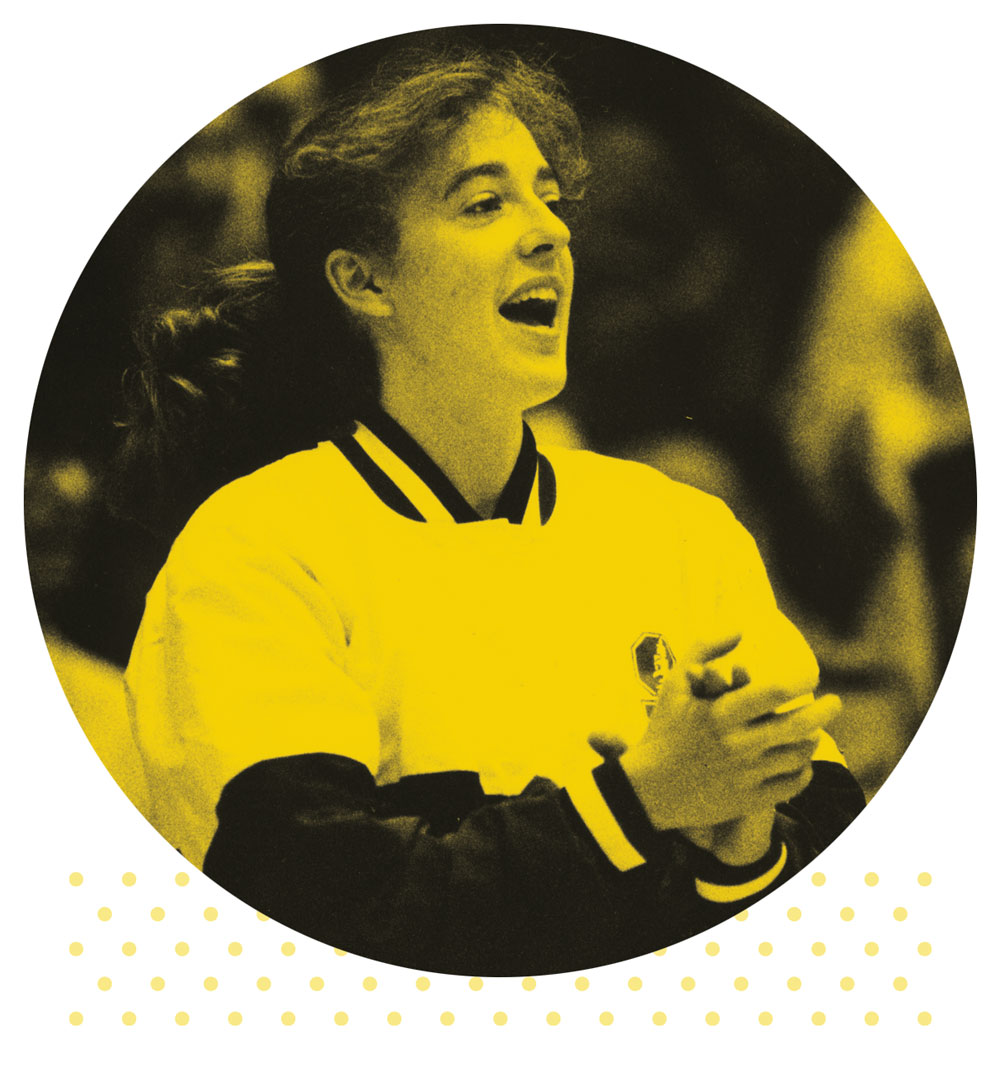 Brooks, the first in this role, faces a compelling challenge: The NBA has 1.6 billion social media followers in rapidly changing societies around the globe; in today’s shifting media landscape, she finds ways to engage the 99 percent of fans who will never attend a game. She credits her success in part to the teamwork she learned while  a walk-on at Stanford. “My role during a game,” she says, “was to know which way  the possession arrow  was pointing.” 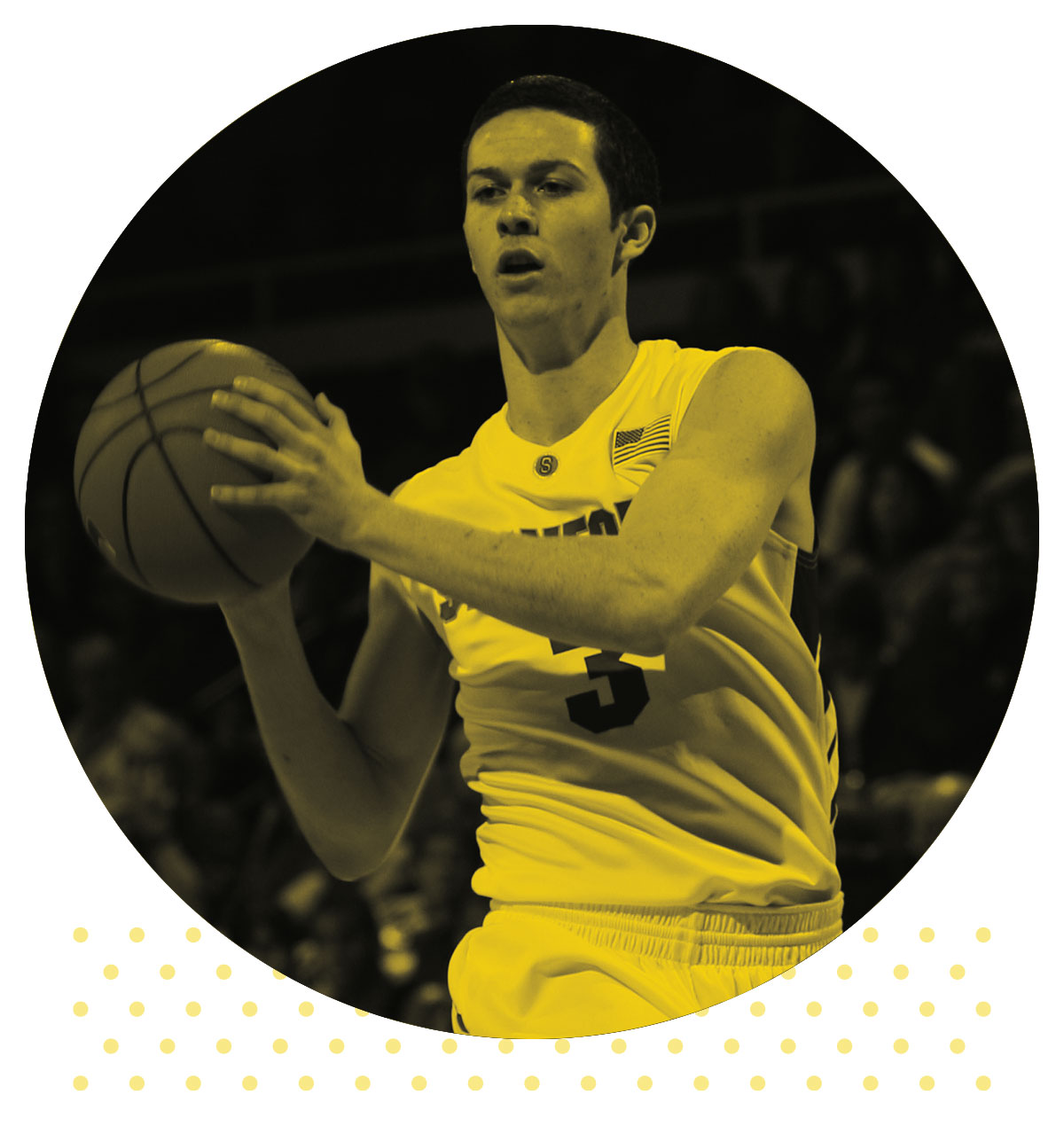 As the head of Basketball Without Borders—the NBA’s basketball and community development outreach program—Ebersole has supported youth around the world. BWB training camps have resulted in hundreds of scholarships to American colleges, 69 NBA players and, this year for the first time, a WNBA draft pick. “As someone who never played professionally but was still able to carve out a career in basketball, I enjoy seeing young people develop,” he says. “We emphasize education, leadership, health and wellness, character development and life skills.” 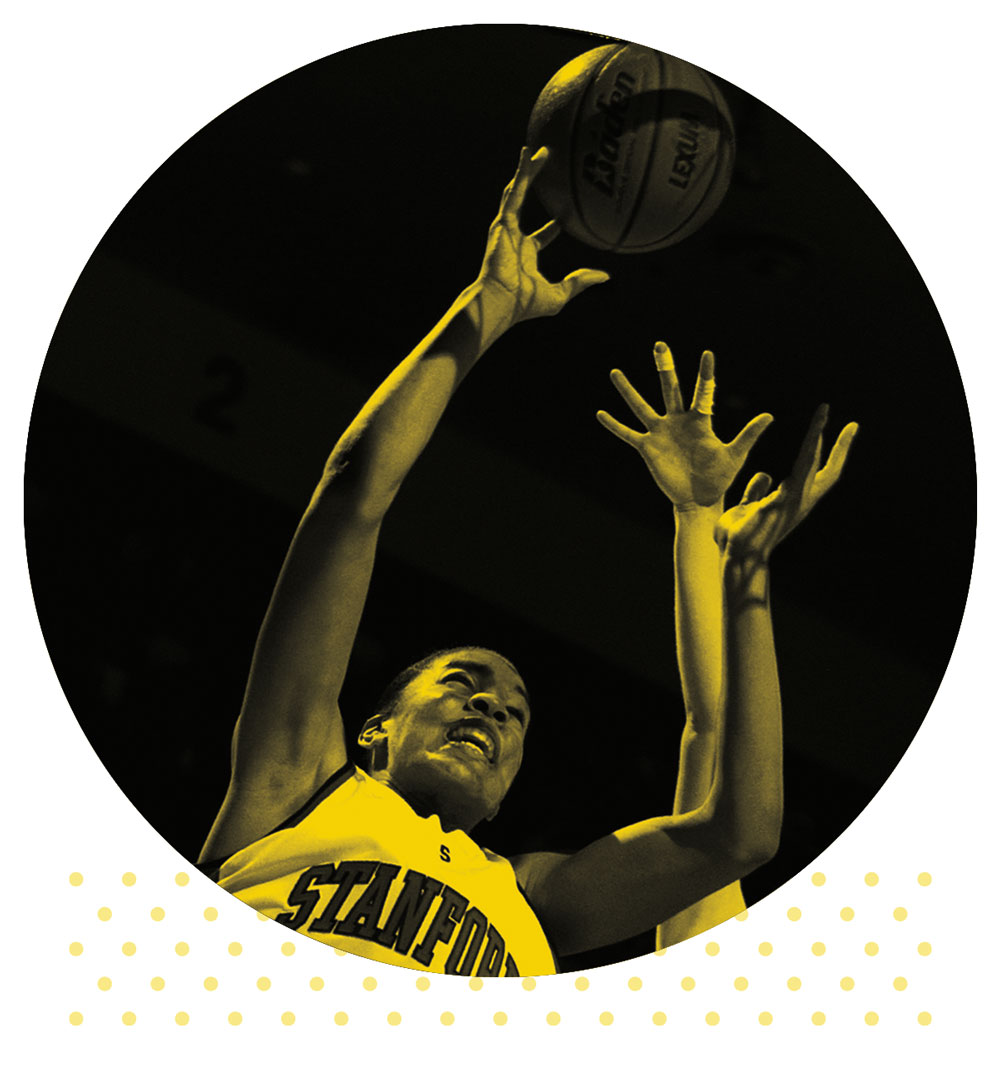 As she oversees scouting, scheduling, venues and playing rules, Donaphin’s favorite days are those when she can influence many aspects of the WNBA, from negotiations with the players’ union to creating programs that support the athletes as they transition into new careers. But realizing the league’s promise is her primary concern. “There is an incredible convergence of factors that we must capitalize on,” says the former forward for the New York Liberty, “which includes a climate of women’s empowerment.” 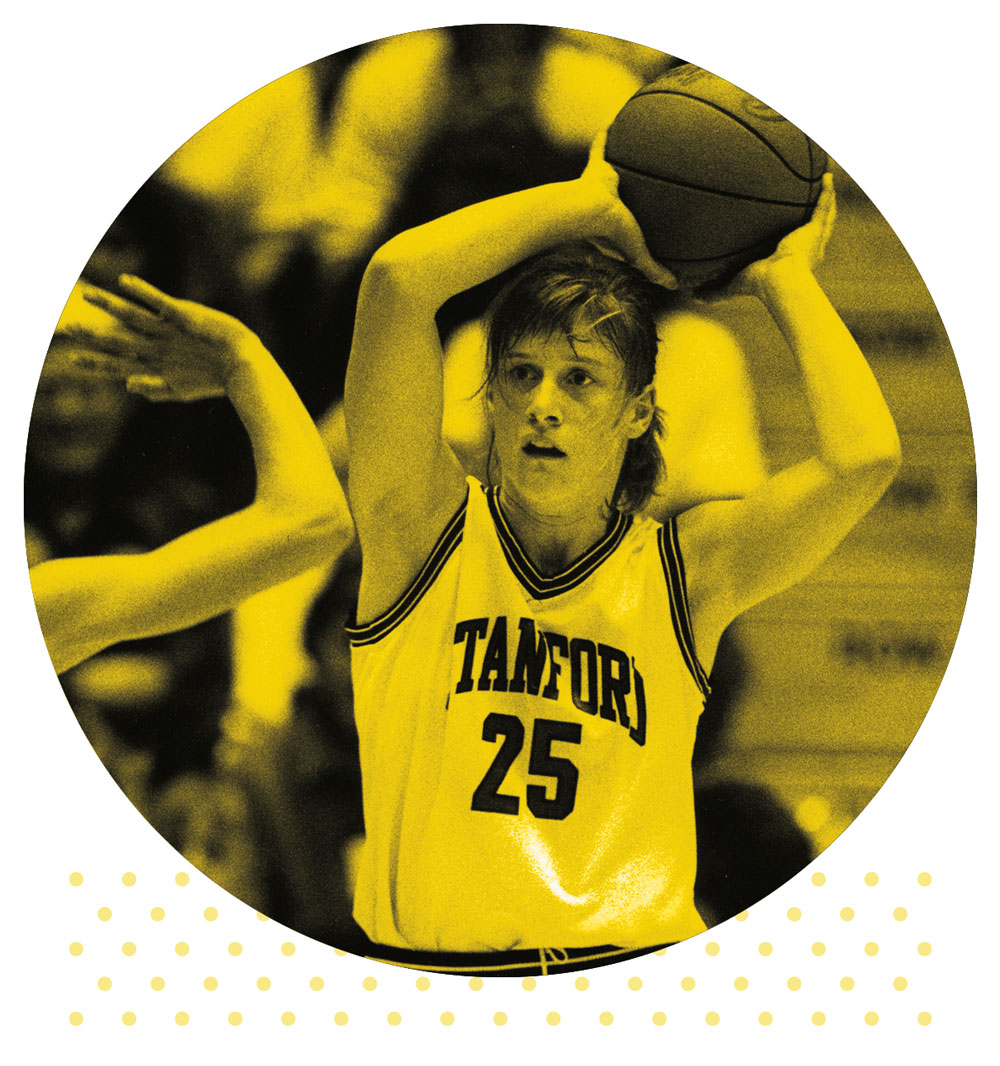 A starter on Stanford’s 1992 national championship team, Hedgpeth has taken the helm of the WNBA at a time when women’s sports get 5 percent of sports coverage and 1 percent of sponsorships. Having cemented deals with CBS Sports and AT&T, she strives to make a “modern, younger, edgier brand” out of the league, which turns 24 this spring. “The WNBA has such untapped potential,” she says. “I focus on how far it will go much more than how far it has come.” 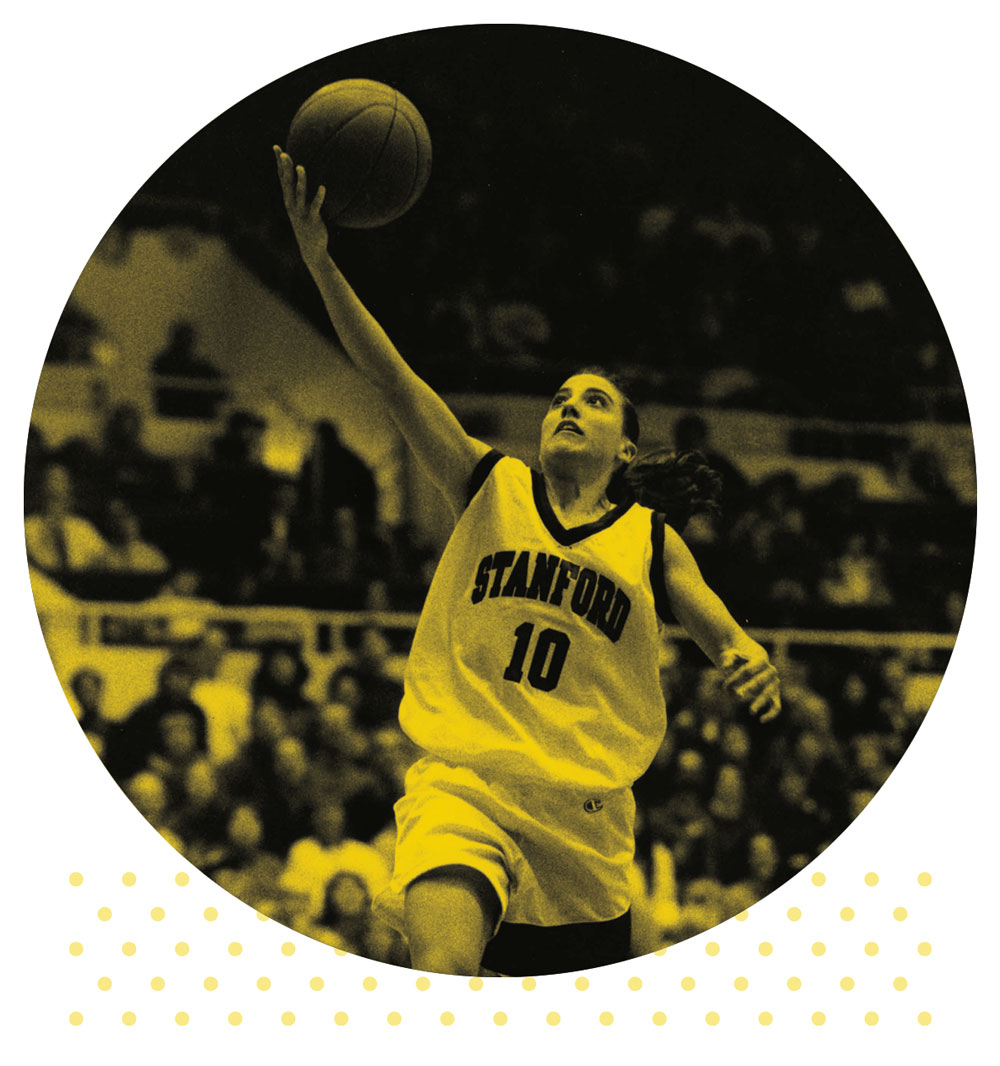 Drafted out of Stanford in 1997 by the Los Angeles Sparks, Wideman later became a lawyer and an activist who built mentorship networks for underserved women of color. Her mission with the NBA is to provide personal and professional development for players. The league’s effort to expand opportunity across cultures and continents connects with her experience as a player: “For diversity to become strength,” she says, “the collective must be prepared to be disrupted and changed by the people around you.” 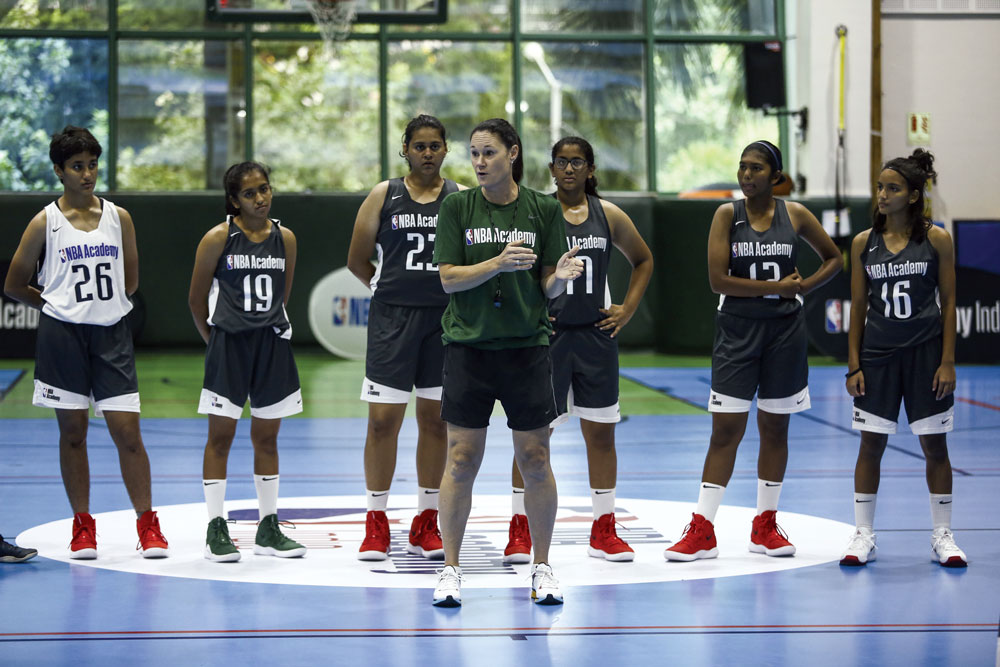 As a high school senior, Jennifer Azzi would have refused her Stanford recruitment offer if her parents hadn’t encouraged her to reconsider for the sake of her education. “I grew up in Tennessee,” she says, “and, honestly, I didn’t even know where Stanford was.” She now sees the decision as one of the best in her life, setting off a streak of career successes: leading the Cardinal to its first NCAA women’s basketball title in 1990, winning an Olympic gold medal, playing in the WNBA, being inducted into the Women’s Basketball Hall of Fame and becoming the women’s basketball coach at the University of San Francisco.

“If there is a single player who put Stanford women’s basketball on the map nationally and helped define the values of the program, it’s Jennifer,” says Christy Hedgpeth, ’94, the WNBA’s chief operating officer. “She helped recruit me to Stanford, and I’ve always felt an enduring connection to her. There’s something special that binds all of us former players together, so it’s been fantastic to team up with Jennifer on initiatives at the NBA and WNBA.”

Now, as the technical director of the NBA Academy Women’s Program, Azzi, ’90, recruits talented young women for training camps in Australia, China, India, Senegal and Mexico. She focuses on both developing the players and finding opportunities for them in the United States.

“One of the biggest successes was last year’s next-generation game,” she says, referring to a program that brings players to the United States for a showcase tournament.

“I think we had 13 or 14 different countries [represented]. It was like a mini-Olympics. That’s the thing I love about basketball. It brings people together. It’s life changing—culture changing.”

Since the NBA Women’s Academies began three years ago, 11 participants have gone on to play at American prep schools or junior colleges, and five have been recruited by Division I schools. This year, Sanjana Ramesh became the second Indian-born female player to receive a Division I scholarship, and China’s Han Xu was drafted into the WNBA.

Basketball provides the platform, but it’s the power of connection that makes her job rewarding, Azzi says. As she brings young women together from different language, tribal and national groups, she feels touched by the warmth that players show one another, and she cultivates these same qualities in her work. She recalls speaking in Mexico when discussions of the border wall were often in the news. “You don’t want to get into politics with people when you’re in this role,” she says, “but the one thing I told them is that I get to represent what’s great about the United States. More than anything, the job is just to show kindness and love and care and respect toward other countries and other people.”

Tara VanDerveer took the Cardinal from doormat to dynamo and helped boost women’s athletics. But as far as she’s concerned, it’s still a work in progress.