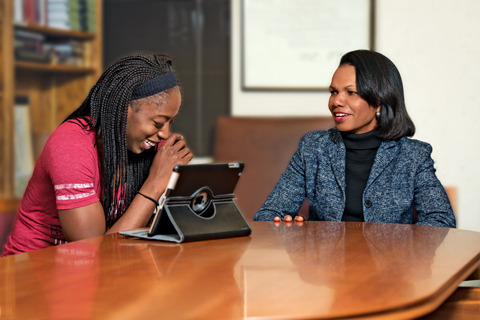 Obsessed and inexhaustible, basketball standout Chiney Ogwumike is taking things one step at a time. She's focused on her last run at an NCAA championship—a maddeningly elusive quest for the Stanford women's team in recent years—and her coach won't stop reminding her that a season is built by making the most of every moment along the way.

"In the end," says Ogwumike, "I'm just thinking about the one thing—man, I would love to win a national championship. Everything you do at Stanford is national championship caliber. You take the best courses, you're pushed doing their homework, and then on the court, every possession matters to Coach Tara."

The discipline required is almost wicked. It helps that Ogwumike willingly embraces what Tara VanDerveer preaches. But, bottom line, she persists because she's a self-winding mechanism, someone who says relaxing is difficult because she always feels she should be doing something. "People see her on the basketball court, but perhaps don't know that she brings the same intensity that you see there to everything that she does," says Professor Condoleezza Rice, Ogwumike's faculty mentor.

The ever-present challenge for Ogwumike, an international relations major, is managing her many opportunities and interests. Some have a comfortable inevitability; some demand reflection and planning. Among the certainties is that she'll go on to pro basketball: "Definitely. That's a given." But she is also intrigued by a wide range of possibilities, including media work, that could lead to post-sports careers. "I know that she is already thinking about graduate school," says Rice, "and I am encouraging her to do so."

Straight ahead, however, is that last-chance NCAA appearance. (The tournament opens March 22.) In Ogwumike's first two seasons, playing on teams led by her sister, Nneka, '12, Stanford reached the Final Four, losing each time in the semifinals. Last season, Chiney matured into the Pac-12 player and defensive player of the year, but the team stalled out in the regional finals. This season, there's renewed hope, added motivation and, realistically, the prospect of graduating without achieving her ultimate goal.

"It's one of those things where you have to stay in perspective," says Ogwumike. The time dedicated to sports, she says, shouldn't obscure the best of what Stanford offers students: getting your feet under you for any kind of future.

"I think you come thinking that you're going to go to class and get good grades and then go to practice and become a good team," she explains. "But you don't realize what's happening as those things are happening. For instance, I think you come to Stanford not necessarily knowing who you are, or knowing what you want to be. But you leave like a more complete person. . . . I think it's that journey, discovering yourself, that Stanford really wants you to be immersed in when you come.

"Discovering yourself through searching for majors, knowing people, going through different likes and clubs and opportunities. That whole discovery puts you in a good position to confront life head-on."

Rice, an intense sports fan, is the only woman on the new 13-member College Football Playoff selection committee. She initially sought out Ogwumike to offer whatever guidance might be helpful academically.

"I do this with students from time to time (both athletes and nonathletes)," she explained by email, "because academic advising is so important to making certain that students use their limited time here in a systematic way. I wandered the wilderness in college (starting as a piano performance major) before I found an adviser who helped me point in the right direction. Maybe that's why I'm so sensitive to the need for good advising. In the case of athletes, they have even greater time limitations and need to have a good plan for completing their work." 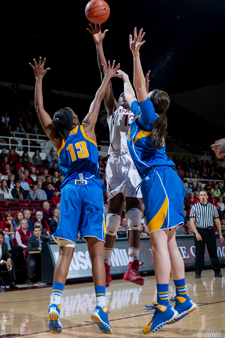 As part of her major, Ogwumike had to fulfill a study-abroad requirement, which she did in Nigeria, her parents' native country. For an athlete on a year-round schedule of training, that necessitated some careful planning. It turned out to fit smoothly into the mosaic of living her Stanford experience to the fullest. And that has helped her prepare for what many Cardinal athletes dread: leaving.

"I'm excited to make that next step," she says, "because I've been here for four years. It feels so wrong—I don't want to leave. But then I am excited for the future. I feel like I'm ready."

Individual honors won't compensate for the absence of an NCAA championship if Stanford falls short again. But the exclamation point on her college career might come with her selection as the national player of the year. She was second in last season's voting and at the end of January was the only player in the country ranking in the top 10 in scoring, rebounding and field-goal percentage.

Whatever happens, she'll keep it in perspective, having absorbed what Stanford is really all about. "I thought it was going to be test taking, and shooting a basketball, and that's what I'm going to get really good at. But no. It's about being able to handle different things that life throws at you."

Rice on Students, Tough Decisions and Her Oil Tanker