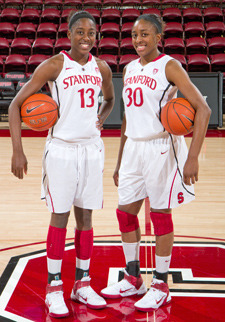 With an early road loss to Connecticut out of the way, the women's basketball team returned to working on its identity during pre-conference play. Five freshmen are getting court time this season (a sixth was sidelined due to injury); the full schedule will showcase an evolution in the team's chemistry and style.

At the forefront will be sisters Nneka and Chiney Ogwumike, the go-to scorers on a squad that must compensate for the departure of four-year standouts Kayla Pedersen and Jeanette Pohlen, both '11. As a senior, Nneka has more status than Chiney, a sophomore, so Stanford prodded the older sibling—just for fun—to comment as if she were the team's coach. She was talking about herself in the third person in no time.

"Nneka needs to continue being the leader that she is," she says, assessing her role. "I think she's trying her best, and trying to help all the young players and get them to understand really what it takes, and the hard work and how much fun you can have when you're successful as a collective team."

Among those younger contributors, of course, is Chiney. Is she as good as touted?

"Definitely," Nneka says. "I would bet my car on it, that she's the best sophomore in the country." OK, but what is your ride? "It's a used Toyota Highlander," she says, laughing. But she loves it, she points out. Then she notes that even though Chiney is a sophomore, "she plays like a senior."

And what about team secrets? C'mon, Nneka, spill.

"I really love to dance," she says after a brief hesitation. "We have many dance sessions in the locker room, almost every day after practice. . . . We're always dancing and rapping."

Rice on Students, Tough Decisions and Her Oil Tanker