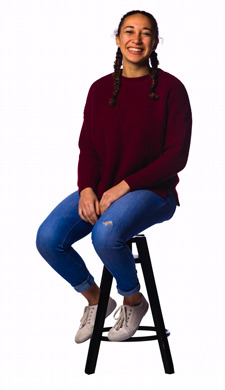 A senior from San Jose, Melton joined the rugby team as a freshman and three years later became its co-president. She co-founded Stanford Mental Health Outreach, which works to destigmatize mental illness. A double major in human biology and African and African-American studies, Melton brings her academic interests into Ujamaa, the black culture theme dorm, where she is the peer health educator. In a series of interviews, Melton told Stanford how she navigates the crossroads of her identity, family life, academics and professional goals.

“Though I recognize Judaism as a part of my history, I don’t necessarily identify with the religion. I think my identification as a black woman is more important to me. It’s more visible, and I think society will see me more so through that lens.”

“I actually had to step down [from the rugby team] this year. It’s been a difficult year. Earlier in the year, my mom was diagnosed with breast cancer. She just finished radiation this past quarter. . . . I just didn’t know how much it would affect me until it started to. I was going home a lot to help out my mom, and practice didn’t seem feasible.

“Something I’ve appreciated about being involved in Uj and the Black House is that I think we are constantly trying to find the flaws within our own community, and talking about those and being explicit about those. We had an event in Ujamaa last year talking about blackness, and what is your blackness. . . . You had people who were from the continent; you had people who were Afro-Caribbean; you had people who identified more strongly with being lower class or middle class or mixed race. . . . We were able to [recognize] that we are all black, but we are also all of these other things.

“I want to work on the connection between race and health, and [to study] how police violence and mass incarceration, which is disproportionately affecting African-Americans, affects their health, how health is criminalized, and the intersections between incarceration and community health.

“One of the things we’ve done [with Stanford Mental Health Outreach] is to have panels in different dorms. . . . It allows students to share their stories about mental health, but also for anyone in the room, it gives them an opportunity to ask questions. . . . We’ve had students share stories about eating disorders, bipolar disorder . . . OCD . . . depression and suicidality—a very wide range of experiences.”

Cheo Hodari Coker brings a black superhero to the screen.