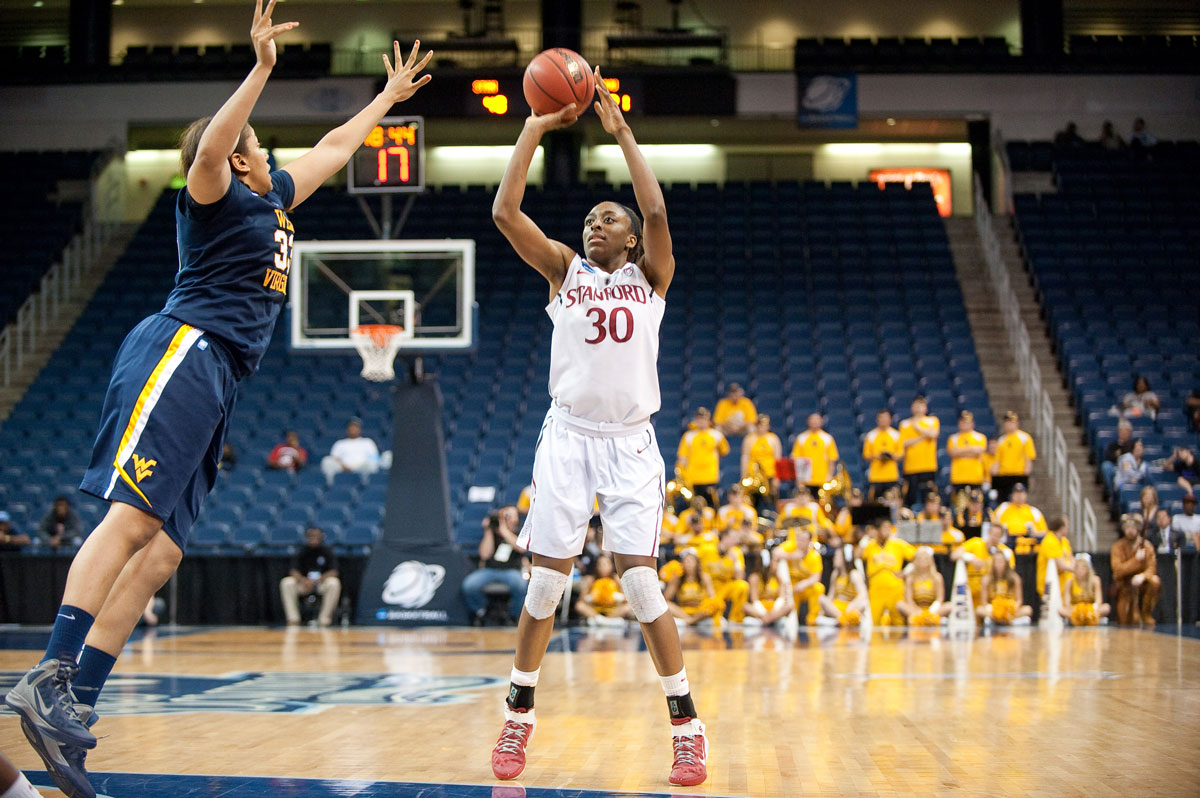 In the fall of 2011, Nneka Ogwumike was focused on what any undergraduate would be: exams, her résumé, applying to postbaccalaureate programs that would help her prepare for medical school.

Yes, she had great expectations for the 2012 Stanford women’s basketball team. (The Cardinal advanced to the Women’s Final Four as Ogwumike became the second-leading scorer in school history.) But that’s where she figured her basketball journey would end. Medical school was her future, not the WNBA.

“It didn’t really occur to me until my younger sister [Chiney Ogwumike, ’14] told me that it was a real possibility, not just to play, but that I’d be drafted No. 1,” she says.

And even then, it took some convincing.

“I was like the annoying little sister that always was on those messaging boards,” Chiney says. “And it seemed like in every mock draft Nneka was No. 1, No. 1, No. 1. . . . I was like Nneka, are you sure [about medical school]?”

Eventually, Nneka came around and the Los Angeles Sparks made her the No. 1 pick of the 2012 draft. She was the league’s Rookie of the Year in 2012. Four years later, she’d win an MVP award and a WNBA championship.

Then, another opportunity that was obvious to everyone else but her came knocking: president of the WNBA Players Association.

“I didn’t really decide to take it on; it just kind of fell on to me,” she says. “But it was clear that it had to be done.”

The WNBA was at a crossroads. Attendance had been sagging, player salaries were stagnant, injuries to star players were up as players felt stretched by the demands of playing both at home and overseas to supplement their incomes.

The league began experimenting with new formats in the All-Star Game and in the playoffs to boost interest. But real leadership was needed to reimagine the WNBA’s business model to ensure the league’s long-term sustainability.

The new CBA includes significant pay raises for the league’s top players, which both sides hope will be enough to keep them from having to play overseas.

That’s where Ogwumike came in. The league wanted its best players to devote themselves to playing in the United States, believing more exposure to the domestic audience would help the league financially and from a marketing perspective. The players said they’d like to find a way to do that, too. Spending half the year playing overseas—where salaries can be as much as 10 times higher for star players than in the WNBA—is hard on many players and their families. But it would only be possible if the league increased salaries, created new business opportunities, and improved benefits for travel, maternity leave and mental health.

That’s right. These Stanford women’s basketball alumni sat across from one another at the negotiating table for one of the most critical labor negotiations in women’s sports history.

“Nneka was captain with me in her sophomore year,” Appel Marinelli says. “She always had all the skills to be that natural leader. And I’ve just continued to follow her.”

Plus, Appel Marinelli says, Ogmumike always asked the right questions: “She’d ask so many questions. [Coach] Tara VanDerveer finally put in a rule that she couldn’t ask questions. ‘Why do we do this? Why is the play run this way? What happens in this?’ It was so many questions all the time, just so she would fully understand the reason behind why we do everything the way we did it and how we did it. But I think that paid off, don’t you? Because she was asking the same questions like, ‘Why is the CBA this way?’ ”

Finally, on January 14, Ogwumike and WNBA president Cathy Engelbert went on Good Morning America to announce what they believe will be a landmark new collective bargaining agreement.

The new CBA includes significant pay raises for the league’s top players, which both sides hope will be enough to keep them from having to play overseas. It also provides for basic upgrades like premium-economy seats on commercial air flights and private hotel rooms on the road.

“Those things may seem small to some people,” Ogwumike said. “But with the nature of our job, those things really matter.”

She also secured better maternity benefits—guaranteeing a full salary while on leave—an annual childcare stipend of $5,000, and a two-bedroom apartment for players with families.

Says Chiney, who spent most of her day on January 14 explaining the deal as a basketball analyst on ESPN: “A lot of people called it groundbreaking. But it’s more ground-establishing. Because we didn’t even have ground to really stand on, whether it came to hotels, flights, getting paid what our value truly is or investing in women so that they can stay [in the United States]. These were things that should be standard, but they weren’t standard. And I think that’s why this resonated so much.”