The former basketball coach is taking on a range of athletics duties. 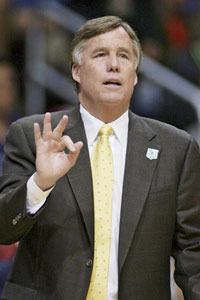 Mike Montgomery, who compiled a .702 record coaching the Cardinal men’s basketball team from 1986 to 2004, returned to the Farm in September as a part-time assistant to the athletic director.

“His wealth of knowledge and experience as an 18-year coach at Stanford University is something from which the entire athletic department will benefit,” athletics director Bob Bowlsby said. “He will make a positive contribution to our program in the areas of fund raising and public relations, and our coaches will benefit from his expertise.”

Montgomery left the Farm in May 2004 to become head coach for the Golden State Warriors. That team let him go in 2006.