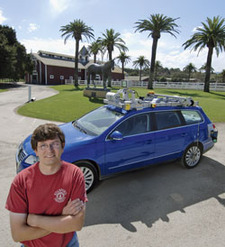 It looks like a normal VW Passat, except for a few extra gadgets. Like the big red button where the cup holders ought to be.

“If something goes wrong, you can press it and take over [driving],” says Mike Montemerlo, a senior research engineer in the Stanford Artificial Intelligence Lab (SAIL).

Like many dads who’ve put in time teaching a teenager how to drive, Montemerlo is proud of Junior. He gazes at the robotic vehicle with great affection and occasionally reaches out to flick off some dust. The question is, will Junior win the race his namesake, Stanley, won two years ago?

A 2006 customized station wagon that sports eight laser rangefinders on the roof and two Intel quad servers in the trunk, Junior was chosen in August to compete in the Urban Challenge organized by the Defense Advanced Research Projects Agency (DARPA). At press time, Stanford’s entry was scheduled to battle it out with 35 other teams in an October qualifying race, then compete in the final DARPA race on November 3. DARPA intends the exercise to simulate autonomous ground vehicles conducting military supply missions in an urban setting.

Two years ago, the Stanford Racing Team souped up Stanley, a bright blue Volkswagen Touareg that won DARPA’s $2 million, 132-mile race in the Nevada desert. To cross the ’07 finish line, Stanley’s successor will have to contend with far dicier challenges, like navigating four-way intersections and parallel parking.

“The desert race was really a test of obstacle avoidance—you had to be able to not run things over that could destroy your vehicle, like rocks, ditches, ruts,” Montemerlo says. “This year it’s more complicated because objects might be moving. You have to change lanes, check your blind spots, look behind you.”

Then again, the team asked for it. When DARPA officials talked with SAIL director Sebastian Thrun two years ago, to see what would ramp up the challenge, the associate professor of computer science said “traffic.”

The complex environment Junior and the other ro­botic vehicles will have to navigate in the Urban Challenge involves choices that are “exponentially” more difficult than following one route through a desert, Thrun says. “We know how to route the vehicle by gps, but the real problem is classifying the surrounding environment as drivable or non-drivable.”

Imagine 20 robotic vehicles whirring around a former military base reconfigured into city blocks and streets. The day before the race, DARPA will hand out road maps of the area. On the day of the race, each team will be assigned multiple missions—drive from point A to point B, and park at point C, perhaps—to accomplish within six hours, driving up to 30 miles per hour.

As the software lead for the project, Montemerlo says it’s critical that Junior be able to continually “refresh” and “revise” his view of the world. Problems will be broken down into two areas—perception and decision making— as Junior sorts out the rules of the road, such as learning that whichever vehicle gets to an intersection first is the first to proceed through it.

In the run-up to the November race, Montemerlo and a dozen teammates were completing the software that would enable Junior to merge, park and detect curbs (“very small but very hazardous”). And during the occasional break, they chatted about the day in the future when computers will be better drivers than people.

“In the U.S., we lose 42,000 people per year in car accidents, and the vast majority are killed by human error—using cell phones or alcohol,” Thrun says. “And then there’s the productivity that’s lost, with workers stuck in traffic for more than an hour per day.” With Junior at the wheel, those workers could telecommute from the back seat.