Science with a Conscience

Panofsky built SLAC and worked to rein in nuclear weapons. 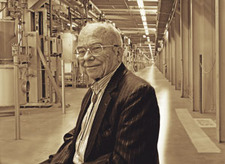 Once Wolfgang “Pief” Panofsky had fought through the bureaucratic tangles to construct the Stanford Linear Accelerator Center in the early 1960s, he faced a final obstacle. With the Cold War escalating, the U.S. Atomic Energy Commission—the precursor to the Department of Energy—sought the power to use the laboratory for classified military research “in the national interest.” Panofsky, with the support of Stanford President Wallace Sterling, resisted, even when federal officials threatened to revoke funding. The AEC soon relented. “If that isn’t an example of staying true to principle—shoving $114 million in 1962 dollars back across the table after five years of hard work to get it—then I don’t know what is,” says emeritus professor Sidney Drell, who worked alongside Panofsky for nearly 30 years as SLAC’s deputy director.

Drell says those who knew Panofsky were unsurprised by his principled defiance. A decade earlier, as a beginning physics professor at UC-Berkeley, Panofsky fell victim to McCarthy-era politics when a conservative California legislature demanded that all UC professors sign loyalty oaths to the U.S. Constitution or face dismissal. Panofsky’s allegiance was without question—during World War II he had gained security clearances to work on the Manhattan Project—yet he reluctantly signed the pledge. But, unnerved by the firings of his unwilling colleagues, Panofsky soon quit the UC for Stanford in 1951.

A particle physics researcher, nuclear arms control expert, adviser to four U.S. presidents and longtime SLAC director, Panofsky died from a heart attack in his Los Altos home on September 24. He was 88.

Born in Berlin in 1919, Wolfgang Kurt Hermann Panofsky was the son of Erwin Panofsky, an eminent art historian. His family fled prewar Germany for the United States in 1934, and Wolfgang enrolled in Princeton University at age 15. For a time, he served as the driver for Albert Einstein, a friend of his father’s. He was lured west to Caltech by noted physicist Robert Millikan and completed his doctorate in 1942.

Panofsky soon moved onto the Manhattan Project, where he consulted government scientists and developed technology to gauge the force of atomic bombs. He witnessed the world’s first nuclear explosion in the New Mexico desert from a B-29 bomber flying 10,000 feet overhead.

His role in the development of the atomic bomb—and witnessing its subsequent devastation of Nagasaki and Hiroshima—led Panofsky to become an unflagging advocate for nuclear arms control. He served on the President’s Science Advisory Committee under Dwight Eisenhower, John Kennedy and Lyndon Johnson. Panofsky lobbied successfully for the Limited Test Ban Treaty in 1963, which forbids nuclear testing above-ground or in the oceans, and helped secure the Anti-Ballistic Missile Treaty of 1972. He also co-founded Stanford’s Center for International Security and Cooperation. “Pief understood that progress in science, while commendable, also created new dangers,” Drell recalls.

In the lab, Panofsky helped create cyclotrons, synchotrons and linacs—the basic tools of particle physics. But it was as the father of SLAC that he developed a reputation as a singular scientist and visionary; in a 1977 profile, Playboy magazine called him “maybe the brightest man in the world.” SLAC-advanced research led to three Nobel Prizes.

Panofsky retired as SLAC director in 1984, but continued to push for arms control until his passing. The day after he died, the San Francisco Chronicle published his last editorial about the threat of nuclear war.

Panofsky is survived by his wife of 65 years, Adele; three sons, Richard, Edward and Steven; two daughters, Margaret, ’72, and Carol; his stepmother, Gerda; and 11 grandchildren.

TED BOSCIA, MA ’07, is a freelance writer in New York.