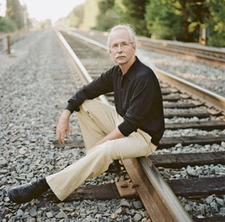 Historian Richard White always cringed at the standard geographer’s lament that he and his colleagues approach history as if it occurred on the head of a pin. Now he’s trying to do something about it.

Behind a $1.6 million award from the Andrew W. Mellon Foundation, last summer White launched a spatial history lab at Stanford—a place to mash up centuries-old data and sophisticated, web-based mapping and animation technologies. He envisions the lab as a way to illuminate new patterns within historical data and generate fresh questions. “We’re talking about something well beyond a fancy map,” White says. “We’re giving people a view of the past they otherwise wouldn’t have. We’ll be able to answer questions we otherwise couldn’t answer.”

One afternoon in late August, two of White’s student assistants feed pages of railroad rate tables from the 1880s into an oversized scanner on the top floor of Wallenberg Hall, the site of the new lab. They are trying to stay apace with the boxes of archival material sent in by the California State Archives. For 12 years, White has been working on a history of U.S. railroads. Nearly finished with the book, he’s now augmenting his research with a spatial history treatment. He expects the archival data, once inputted, to render a striking representation of how the reach of U.S. railroads—and what they charged to ship freight—distorted perceptions of time and space among 19th- century Americans.

“The railroads made the far near, but they also made the near far. Local farmers were angered and manipulated by the rates put in place by the railroads that often made it more costly to ship things locally. Because of this, people’s lives and businesses were under great control by large corporations.”

White offers a simple analogy for his concept of distorted space: “We know that Palo Alto and San Francisco are the same mileage apart at 7 a.m. and 2 p.m. But we also know that the cities are closer together at 2 p.m., when it takes less time to get there.”

The Mellon Foundation selected White and three other American professors for its annual Distinguished Achievement Award in December 2006. White doesn’t see a dollar of the prize, all of which goes to Stanford. But, he says, “I get to say how it’s spent. And it’s really hard for a historian to spend $1.6 million.”

Collaborating with White are Zephyr Frank, a professor of Latin American history, and Jon Christensen, a doctoral student and associate director of the spatial history lab. Frank has partnered with re­searchers in Brazil to reconstruct, block by block, Rio de Janeiro circa 1850. He and his assistants have overlaid a painstakingly detailed map of the city with the locations and demographic information of residents afflicted with yellow fever during that time. They then developed a Flash animation that re-creates the march of the disease through Rio’s neighborhoods better than most written accounts.

“This is something you can’t do in books,” Frank says. “The historical reports tell you that the yellow fever spread like a fire or a flood. With these tools, you can see for yourself how it progressed through the city.”

At a bank of computers across from Frank, Christensen searches for clues about the gradual disappearance of the Bay checkerspot butterfly, an indigenous California species that’s been threatened since 1987. He uses years of U.S. Geological Survey statistics and charts to create a composite map that shows how urbanization, shifting soil compositions, and other changes in the butterfly’s habitat might have contributed to its decline during the last century. Christensen has an emerging theory that earlier conservation efforts failed and actually may have precipitated the species’ downfall.

White and his colleagues know they’ll face an audience of skeptics with their un­usual presentation of history—even within their own department. But they’re also convinced their efforts will catch on. “I’ve been writing narrative history for a long time, but I want to move beyond that to a history that can be visualized, navigated, re-created and manipulated right before our eyes,” White says. “If we succeed in this, we’ll be utterly forgotten. It’ll just be picked up and spread.”

Ultrarunner Will Laughlin has ascended a 13,000-foot peak in the snow, trudged 60 miles on a sprained ankle, and raced for a week in the Sahara. For this he receives neither fame nor fortune. Why keep going? He&rsquo;s not exactly sure.

The former basketball coach is taking on a range of athletics duties.