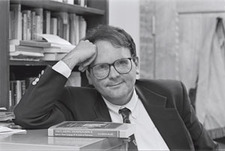 Fliegelman was “the best but not easiest” of his graduate students, Dekker said, drawing knowing chuckles from those who gathered in Memorial Church on September 20 for a service to commemorate the English professor’s life and work. “It was a challenge to ‘advise’ somebody who already knew many things that I did not know about the writings of 18th-century thinkers, novelists and revolutionary propagandists.”

English professor David Riggs, who first taught Fliegelman, PhD ’77, in the fall of 1970, recalled his friend’s fondness for July 4 and his belief that “everyone should declare his or her independence.” Professor Arnold Rampersad noted that when Fliegelman “spoke of intellectual matters, he blazed. I sometimes thought he would set himself on fire, lose control; but it was in fact always a controlled blaze, as one fights wildfires. The light he gave off illuminated in extraordinary new ways the subject of his ardent attention.”

A specialist in American literary and cultural history, Fliegelman died on August 14 of complications from liver disease and cancer. He was 58. (See Class Notes, obituaries.) Last spring some 60 former students had gathered on the Farm to celebrate his work, including two books considered groundbreaking in his field: Prodigals and Pilgrims: The American Revolution Against Patriarchal Authority, 1750-1800 and Declaring Independence: Jefferson, Natural Language and the Culture of Performance.

Fliegelman was working on a third volume: Belongings: Dramas of American Book Ownership, 1660-1830. English professors emeritus Albert and Barbara Gelpi interviewed him about this project for an article in the Spring 2006 issue of Imprint.

“Books are places in which the deepest intimacies can be achieved, for books read us as we read them,” Fliegelman told the Gelpis. “The conversation never stops, always with an edge of vulnerability. I will actually wake up in the middle of the night sometimes and change the placement of books, putting X next to Y because I’ve been thinking about X, often in anticipation of sharing it with students.”