No. 2, and Trying Harder

For women's volleyball, a roaring start. 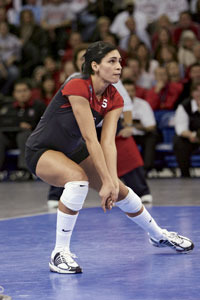 All those double-doubles in her stats—like the 22 kills and 16 digs she notched in the September 8 game against No. 9 BYU—don’t impress junior Cynthia Barboza.

“I couldn’t care less,” the All-American outside hitter says. “There are so many other intangible elements that go into the game.”

Tenacity, for one. After Barboza suffered a season-ending ACL tear at the start of her freshman year, she faced eight long months of therapy. But did she despair? Nah. “My goal was to not be hesitant when I came back. If my knee wasn’t strong enough to do a drill, I would just pull myself out, because I didn’t want to train myself to hesitate.”

As the second-ranked Cardinal women’s volleyball team (16-0) knocked down one opponent after another in its best start in five years, the defending Pac-10 champion appeared to be on track to recapture the conference title, as league coaches have predicted. Head coach John Dunning, starting his seventh season on the Farm, was optimistic but knocking on wood. “We’re pretty healthy now, we have some good depth, and people are working hard—and working on playing together.”

“Depth” could be an understatement. In June, Barboza competed with the U.S. National Team at the Pan American Cup in Colima, Mexico, and helped the team finish in fourth place. In July, she and All-American junior middle blocker Foluke Akinradewo were starters (the two youngest on the roster) on the U.S. National Team that won bronze at the Pan American Games in Brazil. And freshmen Alix Klineman and Cassidy Lichtman played on the U.S. Junior National Team, which finished fourth at the world championships in Thailand. Then there’s All-American senior setter Bryn Kehoe, who was averaging 14.42 assists per game—best in the conference, and first on the Cardinal career-assist chart.

Kehoe and Barboza teamed up last spring to take second in CSTV’s Powerade Collegiate Beach Volleyball Championship in San Diego. “They’re trying to see if they can get beach volleyball to be a collegiate sport, so it was kind of cool—but a very different game,” says Barboza, who grew up watching Olympic beach gold medalist Misty May play the indoor game for her hometown team, Long Beach State. “Indoors, it’s easy to specialize in specific skills, but in beach volleyball, you have to be a complete player.”

As a left-side outside hitter, Barboza has plenty to keep her busy. She has to serve/receive, pass, block, dig and score, plus smack down all those pesky out-of-system balls—the high sets that give opponents plenty of time to prepare. “When you get down to only one or two options, that’s called ‘out of system,’” Dunning says. “And when you’re out of system, the other team knows what you’re going to do, and they can prepare for it.” In that situation, he adds, players like Barboza “have to create an advantage with their own skill.”

Barboza’s skills include athletic leaps at the net and a huge serve. She currently is fifth in the Pac-10 in kills per game, and ninth in digs per game. But she has her own measurements of success. “The best way to tell if it’s been a great game is when I see the things I’ve been working on in practice translate. If I’ve been working on hitting sharp angles, and I can excel on that in a game, that feels good.”

Barboza says she and her teammates don’t talk much about the loss to Nebraska in last year’s NCAA finals, even if “it’s always kind of in the back of our minds.” Instead, they focus on playing each day’s match. “It’s a new year, a new team, a new season.”