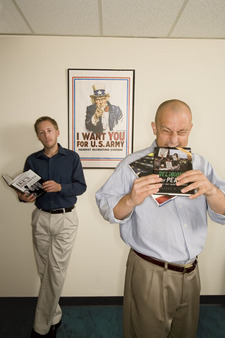 Not for the food; he subsisted mostly on ice cream. But the dining halls gave him an ideal forum for provoking liberals. He'd argue against the California grape boycott. He'd put down his tray and declare: “Public schools should be abolished.”

Three years ago, Jackson left a marketing job at PayPal with a sizeable chunk of dot-com-boom cash and a dream of standing up for the right in a world that—as he saw it—was saturated with liberal propaganda. Jackson persuaded Norman Book, '91—a fellow PayPal alum and die-hard San Francisco Giants fan—to join him in founding a publishing house, World Ahead Media.

They rented an office not far from the Los Angeles airport, tacked up a picture of Ronald Reagan and an “I Love Capitalism” poster, and put a shrewish Hillary Clinton bobblehead on the copier. Their first release was Thank You, President Bush, a collection of essays by conservative luminaries, among them Phyllis Schlafly and Bill Bennett.

Since then, World Ahead has published about two dozen books—mostly small releases, with an average of 7,500 copies printed. They publish some straight-up nonfiction on history and economics, but they also like to lob a grenade or two.

“Even some conservatives would think that might be little paranoid . . . it's a black-helicopter topic,” says Elizabeth Kantor, editor of the Conservative Book Club. But with at least 25,000 copies sold, The Late Great U.S.A. hit the New York Times bestseller list in late summer.

The Sky's Not Falling! Why It's OK to Chill About Global Warming is a children's book by Holly Fretwell that aims to stop kids from circulating petitions to save polar bears (or, worse, to ban Hummers).

February will bring Crescent of Betrayal: Dishonoring the Heroes of Flight 93, a book that claims the memorial planned for United Flight 93, which crashed into a Pennsylvania field on 9-11, looks like an epic mosque, with design elements that echo Islamic tradition at every turn. The author is conservative blogger Alec Rawls, Gr. '90.

Reactions to these books filled Jackson's in-box with typo-strewn catcalls:

“are you aware what idiots you are?”

“Go get a job and do something useful with you life.”

“I saw your interview with Chris Matthews. Aside from looking like you're 12 years old in that little buzz cut of yours, you come across as a little snot-nosed brat.”

Jackson—who does have a baby face and a Bart Simpson buzz cut—doesn't mind the hate mail. He grew up wanting nothing more than to mix it up in the world of ideas. As a teen, he'd grab the newspaper each morning and flip eagerly to Thomas Sowell's columns on politics. As an economics major at Stanford, he joined the College Republicans and served as a student rep on the Board of Trustees' finance committee. “I said very little,” Jackson recalls. “When you have Condi Rice on one side of you and Charles Schwab on the other, you quickly realize you're not as smart as you think.”

Jackson also wrote for the Stanford Review—which Norman Book had co-founded nearly a decade earlier. A history major, Book earned a master's degree in biblical studies before working as a computer consultant. He's less combative than Jackson, with a dry wit and a low-key manner, but they share a common goal. “We don't want to be a lightning rod for the sake of being a lightning rod,” Book explains.

“Especially,” Book interrupts, “if we feel only one side's being heard.”

They feel that way quite often. Take global warming. Bucking worldwide scientific consensus, they say they're not convinced the phenomenon is real—or, if it is real, that humankind is to blame. Bottom line: no matter how hot it's getting, Jackson and Book fear that a massive, government-run effort to save the planet will muck up the free market and do more harm than good. Other children's books in the works will take on affirmative action or, perhaps, gun control, if Jackson can find a way to rally kids around the Second Amendment without making it sound like he's urging them to run out and buy Uzis.

“There have been liberal authors and publishers around for quite a while. All we're doing is responding to that. We should be less controversial than we are, but the knee-jerk reaction by liberal elements in the press is to say, 'Look at those dastardly conservatives!'” Jackson considers. “Pugnacious may describe us, but dastardly does not.”

Our survey results are in, and here s what readers say they want.