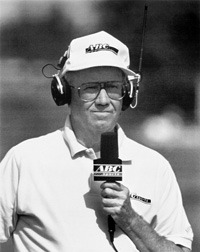 Long before Tiger Woods, ’98, and Tom Watson, ’71, began their celebrated careers, BOB ROSBURG was winning championships and wowing audiences. First as a player and later as a broadcaster, “Rossie” spent more than 50 years in professional golf, winning six PGA tour events and pioneering the use of on-course television reporting.

Winner of the PGA Championship in 1959 and twice runner-up at the U.S. Open, Rosburg, ’48, died on May 14. Although he had been battling cancer, the cause of death was a head injury sustained in a fall near his home in La Quinta, Calif. He was 82.

Born in San Francisco in 1926, Rosburg was a golf prodigy. At 4 he was featured in Ripley’s Believe It or Not and took part in a six-week golfing exhibition that also featured Antarctic explorer Richard Byrd. When he was 12 he defeated retired baseball legend Ty Cobb in a championship match at the Olympic Club.

At Stanford, Rosburg earned letters in baseball and golf. He was a key member of the 1946 NCAA championship golf team and was invited to spring training by the Brooklyn Dodgers.

After graduating, he sold cars and insurance before turning to golf full time as an instructor. He began playing on the PGA Tour as the game’s popularity rose in the 1950s. The highlight of his career was the PGA victory at Minneapolis Golf Club, where he erased a six-shot deficit with a final-round 66 to win by one stroke.

In 1975, Rosburg commenced a 31-year broadcasting career with ABC Sports.
He was the first to report from the golf course during play—now a staple of coverage at every major event. He was beloved for his storytelling and pet saying: “He’s got no chance.”

Rosburg is survived by his fourth wife, Becky; three children from his first marriage, Bob, Deborah and Bruce; and several grandchildren.

The reality is, to beat her competitors in cable TV, Andrea Wong has to put on a good show.