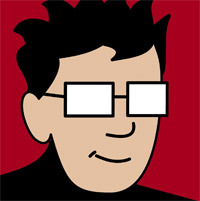 Science-fiction legend Isaac Asimov has called Scott Kim "the Escher of the alphabet." A professional puzzle and game designer, Kim, '77, PhD '88, specializes in manipulating letters so that they can be read as one or more words from different orientations (see examples below). In the 1980s, Douglas Hofstadter, '65, popularized the term ambigram for the art form. Two three-dimensional shapes that could be read as G, E or B appeared on the original 1979 cover of his book Gödel, Escher, Bach. Kim first started experimenting with letter forms in Matt Kahn's beginning graphic design class at Stanford. Given an assignment to "do something with figure and ground," he instead started playing with the words "figure" and "ground." Much of Kim's art relies on the human brain's propensity to assign meaning to patterns. It turns out there's an endless variety of shapes we can perceive as an A. "Letters are such familiar visual things that we take them for granted," he says, "But when you look closely, they're really deep."

Read a January 2011 update on this story.