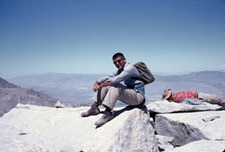 Bob Rockwell was 16 years old when he first set foot on Mount Whitney. That foot was clad in a street shoe, as were those of the high school friends who accompanied him on May 24, 1952. “We were just kids looking to beat the summer heat,” Rockwell says. “Unfortunately, we were completely unprepared to do it.” Although snow covered the trail at 10,000 feet, two of the day hikers pushed on to the 14,497-foot summit. Realizing it was too late to descend, they sought protection in the hut there. “The door had been blown off during a winter storm, and inside was drifted five feet deep in snow,” Rockwell says. “We hung our socks on the wall to dry, ate the one candy bar each of us had brought for the trail, and spent the night sitting facing each other with our bare feet stuck in each other’s armpits to try and avoid frostbite.”

Rockwell may have first climbed the tallest peak in the contiguous United States on a whim, but today he’s “an unashamed repeat offender” on the heights. He has ascended more than 1,700 peaks around the world, in Russia’s Pamir, South America’s Andes, Pakistan’s Karakoram, Nepal’s Himalaya, the Alaska Range and his own Sierra Nevada. He has climbed with luminaries such as Eric Simonson and Ed Viesturs. Nowhere is his achievement more remarkable than on Mount Whitney. In the 136 years since the first documented visit to the apex of the United States, no human being has signed his name in the summit register more times—145 as of May—than Bob Rockwell.

After earning his undergraduate degree in physics from Cal and his advanced degrees in aeronautics and astronautics from Stanford, Rockwell returned to China Lake, Calif., where he had spent his high school years. He worked in what he cryptically describes as “weapons research” at the local naval base and raised three children with his wife, Sheila. In whatever spare time he could claim, Rockwell headed for the hills. His Whitney forays were frequent, many times undertaken as a means of training for other climbs.

Rockwell’s decades of experience were on full display during Climb No. 143, in August 2008, as he guided a party of three up the rugged “Mountaineer’s Route” on Whitney’s northeast shoulder. He shared his knowledge of safe and unsafe water sources, ran a full set of vitals on a distressed climber near the top, and on the descent monitored the progress of a slow-moving solo hiker whom he feared might not return to the trailhead until well after midnight.

During a break near Iceberg Lake, the conversation turned to his record number of Whitney ascents—and his likely challengers. “There’s one guy named Jack Northam,” Rockwell said. “A former competitive cyclist from Colorado. He’s been climbing the mountain a lot lately. I think he has around 68 ascents. Sometimes he’ll leave at midnight, climb the trail to the top and get back around 10 o’clock in the morning. Then he and his wife, Betsy, will make another lap up and back together. He gets two summits in a day that way. He told me a few weeks ago, ‘Bob, you may own the record for Whitney ascents, but I’ll bet Betsy and I hold the record for the most climbs by a married couple. I have 65 and she has 28.’ And I told him no, that my wife and I have that record too. I have 142 ascents, and Sheila has never climbed the mountain.”

Scot Hillman is class of '80