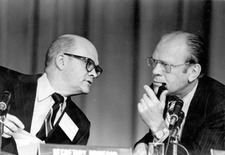 Claude Brinegar was a former Democrat who had never met Richard Nixon when the Republican president asked him to become the secretary of transportation in 1972. Brinegar accepted and became a key cabinet member, restructuring the railroads and working to blunt the effects of the 1970s energy crisis.

Brinegar was born as Claude Rawles Stout on December 16, 1926, in Rockport, Calif. After his father abandoned the family, his mother married Butler Brinegar, and Claude took his name.

He married the former Elva Jackson, ’50, in 1951. The couple had three children and later divorced.

Brinegar joined Union Oil in 1953 and was a vice president when Nixon tapped him to come to Washington. Within days of arriving, he was confronted with a crisis in the railroad industry that threatened to shut down the flow of goods. His effort to save Penn Central and several other troubled railroads resulted in the restructured company known as Conrail.

Spurred by the Middle East oil embargo in 1973, Brinegar spearheaded legislation—later repealed—that established a national 55 mph speed limit. It was an ironic twist in a career that also included a close association with the Daytona Speedway; for years Brinegar drove a Porsche formerly used as a pace car.

The first of President Nixon’s cabinet members to speak out against Watergate, he said in May 1974 that he was “shocked, offended and discouraged” by the “mess.” He returned to Union Oil in February 1975 after resigning as transportation secretary, and retired in 1992.

Brinegar is survived by his wife, Karen Bartholomew, ’71, whom he married in 1995; his three children, Claudia Berglund, Meredith Cross and Thomas Brinegar; and four grandchildren. His second wife, Mary Katherine Potter, died in 1993.