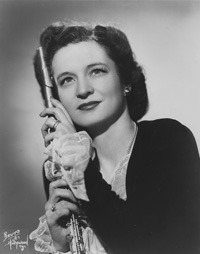 Decades before the word feminist came into popular usage, FRANCES BLAISDELL was blazing trails. At a time when women were seldom hired as professional musicians, she worked steadily in New York City’s most prominent concert halls, forging a 50-year career as a performer.

A lecturer and beloved flute teacher in Stanford’s music department for 35 years, Blaisdell died on March 11. She was 97.

Blaisdell’s father, a self-taught amateur flutist, introduced her to the instrument when she was 5. Disappointed she wasn’t a boy, he called Frances “Jim.” But he insisted on auditions for her with teachers who dismissed the idea of a girl flutist. One such audition secured a scholarship to what is now the Julliard School of Music.

Blaisdell performed in a gold lamé dress as a soloist at Radio City Music Hall in the early 1930s, sandwiched by Rockettes, and in a short but lucrative stint in vaudeville. She played on Broadway in South Pacific and Carousel, and on the Hour of Charm on CBS and NBC radio with Phil Spitalny and His All-Girl Orchestra. She and her husband, clarinetist Alexander Williams, and three other Philharmonic players formed the Blaisdell Woodwind Quintet, which also had a radio series.

In 1973, Blaisdell moved to California and started teaching at Stanford. In 2006 she received the Lloyd Dinkelspiel Award, which recognized her “extraordinary teaching, mentorship and support” of both majors and non majors. She kept in close contact with many of her students (one even called her from the delivery room) and at 97 still had 300 people on her Christmas card list.

She is survived by her daughter, Alexandra Hawley, ’65, MA ’69; her son, John Williams; three grandchildren; and three great-grandchildren. Her husband died in 2003.